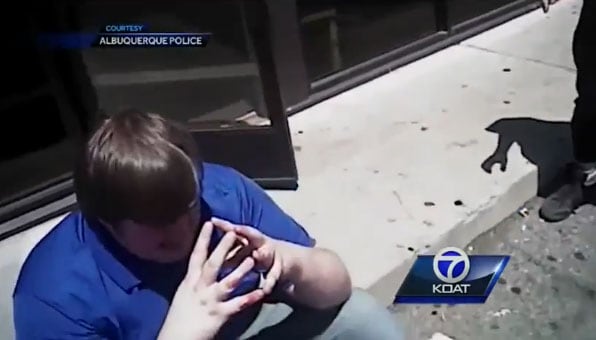 The two employees can be seen on the video, obviously upset over the ordeal. One still had duct tape on their ankle. (Photo: KOAT)

Video captured from an officer’s lapel camera was released by the Albuquerque Police Department this week and showed the chaotic moments that filled an Albuquerque smoke shop last month following an armed robbery ending with the suspect shot dead by a shop employee, KOAT reported.

Officers entered the Oasis Smoke Shop and Hooka Lounge to find two distraught employees and the deceased suspect inside.

Authorities led the employees outside where they then discovered remnants of duct tape around one of the employee’s legs.

Apparently, the armed suspect had entered the smoke shop and bound the employees’ legs with tape before taking off with some cash. But the suspect, who was later identified as William Corrie, then returned to the shop, for reasons authorities have yet to speculate. It was at that point a customer noticed Corrie with the mask over his face and a gun in his hand, so he called 911.

“As soon as I’m walking to my car, I see some guy walking in,” the customer told the 911 dispatcher. “And he puts a scarf over his face and he (expletive) pulls a gun out and walked in the door.”

As police arrived and began to comb the scene, the smoke shop employee, whose name has not been released, could be heard saying, “What did I do?”

Authorities can then be seen on the video making their way into the shop, where Corrie lay lifeless on the floor.

Non charges were filed against the employee, who authorities determined fired in self-defense.