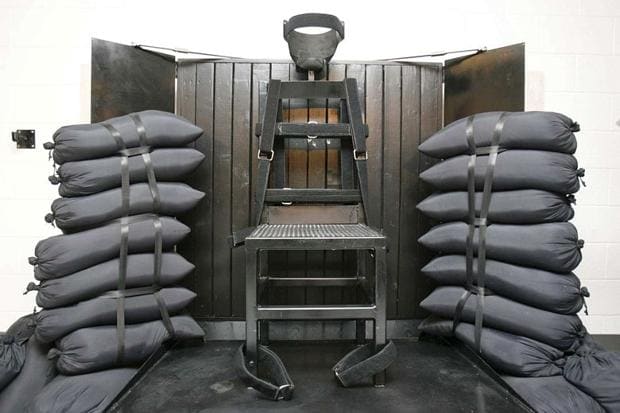 Utah has carried out 40 executions by firing squad, the last in 2010. (Photo: Times of London)

Following a spate of issues nationwide with condemned inmates and the lethal injection process, a committee of Wyoming lawmakers gave their stamp of approval to bring back the firing squad.

Proposed changes to state law would include removing references to the use of the gas chamber as a backup means of execution if lethal injection was not available, and substitute the use of firing squads in its place. With the state unable to obtain the drug cocktail used in lethal injections, the secondary means of execution could soon be utilized.

The draft measure was approved by a 10-3 vote of the Wyoming Joint Judiciary Interim Committee in their scheduled meeting in Laramie last Friday.

The legislation, already described as the Firing Squad Bill, would give the state more options to choose from should the long-standard chemical injection process prove unavailable when needed.

Wyoming has not executed an inmate since the 1992 lethal injection of mass murderer Mark Hopkinson. The gas chamber has not been used in the state since 1965.

Increasingly lethal injection, often regarded as the most humane form of capital punishment, is being seen by some as anything but. Recently, an Ohio man, Dennis McGuire, lingered for 26 minutes after being injected.

The reason for his prolonged demise? McGuire was given a two-drug cocktail, which included a sedative and a painkiller, both of which had never been used in an execution.

The reason these new drugs were used? Traditional drugs have been hard to come by thanks to voluntary embargoes orchestrated by European pharmaceutical companies that object to having their drugs, e.g. pentobarbital, used to kill inmates. This had led not only Wyoming, but also Missouri and Utah to consider firing squads as more humane than the current alternatives.

Some on the panel did not agree that a return to the firing squad would guarantee a quick and painless execution of sentence upon those condemned.

“We’re all operating under the assumption that this is going to be instantaneous death,” said Rep. Stephen Watt, R-Rock Springs. “What happens if everybody misses?”

This controversy over the potential future use of firing squads has not escaped the attention of the courts.

In December 2013, Chief Federal Judge Alex Kozinski, over the Ninth U.S. Circuit Court of Appeals, wrote a dissenting opinion in the case of a convicted Arizona murderer over the use of lethal injection. Kozinski, argued the method was “misguided” and contended that more primitive but foolproof means of execution should be considered preferable.

“Sure, firing squads can be messy, but if we are willing to carry out executions, we should not shield ourselves from the reality that we are shedding human blood,” wrote Kozinski.

Wyoming’s only current death row inmate, 68-year old Dale Eaton, saw his legal team file a 300-page challenge to the state’s death penalty verdict in his case. Convicted of the 1988 rape and murder of 18-year-old Lisa Marie Kimmell, a date for Eaton’s execution has not been set.

Wyoming’s bill will now head to the floor of the legislature for debate, and could pass as early as January 2015.