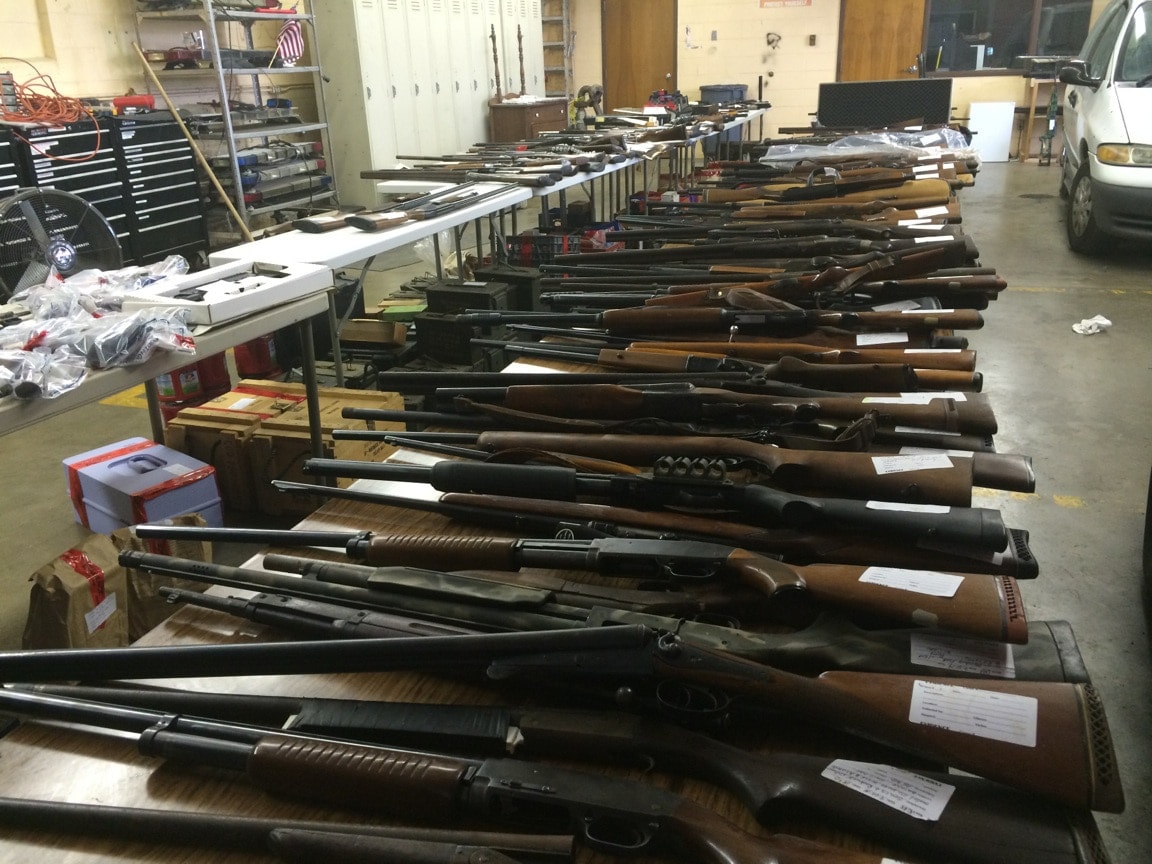 Nearly 400 guns of all sorts, many stolen or illegally modified according to authorities, were seized in a raid on a junkyard in Pulaski County, Missouri last week. (Photo: Fox2)

A search warrant issued on a homicide investigation by the Pulaski County Sheriff’s Department turned up a treasure trove of ill-gotten property, including not only a massive amount of guns but also jewelry, coins and cash.

The raid on Friday, in which several departments assisted, was against Hilltop Motors, a salvage yard in the Waynesville area, and the next-door home of Richard E. Jensen, 49.

Upon search, the PCSD uncovered an estimated 350 to 400 firearms as well as what some authorities are calling the stockpile of loot for a large gang of thieves. Already several firearms have been matched through serial number searches of stolen guns while others have been illegally defaced or modified.

“I’ve been in law enforcement 30 years, and I have never in my life seen so many firearms in the possession not one individual or one business, besides something like Bass Pro in Springfield,” Pulaski County Sheriff Ron Long told local media.

Authorities had delivered the warrant in a search for evidence in the murder case of Robert Willhite, 82, who died following a severe beating in the course of an apparent robbery in August. Among the items stolen from the wheelchair-bound Willhite were gold coins and firearms.

According to the Waynesville Daily Guide, investigators were put on Jensen’s trail after a suspect in Willhite’s murder advised he sold the junk yard owner coins stolen during the robbery.

However, during the search, it became apparent that deputies had stumbled across something larger. In all, the 30-hour search of the property, with the assistance of other local and federal agencies as well as the Waynesville Rural Fire Protection District, who provided equipment, yielded the largest firearms seizure in the agencies history.

Authorities disclosed that at least 40 of recovered firearms were confirmed stolen through the Missouri Uniform Law Enforcement System (MULES) serial number database and will eventually be returned to their rightful owners. That number is “expected to rise substantially,” according to a release from PCSD. Another 45 to 50 were illegally modified by their serial numbers defaced, barrels cut down to illegal lengths, or made fully automatic without the proper documentation.

Jensen is being held in the Pulaski County Jail on a $250,000 bond. He is currently charged with two counts of Unlawful Possession of Firearms, but is expected to face further charges in coming days as investigators continue processing evidence.