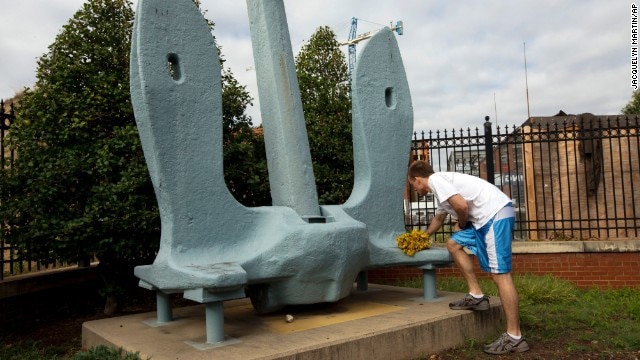 Today, on the anniversary of the Washington Navy Yard shooting, President Obama addressed the issue of gun violence by asking the public to embrace common-sense reforms to prevent such tragedies from happening.

“One year ago, 12 Americans went to work to protect and strengthen the country they loved,” the president said in a statement. “Today, we must do the same – rejecting atrocities like these as the new normal and renewing our call for common-sense reforms that respect our traditions while reducing the gun violence that shatters too many American families every day.”

Thirteen people died at the headquarters of the Naval Sea System Command in Washington, D.C. last year when a gunman stalked the halls with a shotgun, shooting at those inside the installation.

By the end, the gunman, identified as a 34-year-old civilian contractor and Navy veteran, was killed in a gunfight with police. Authorities and media believed he suffered from mental illness as there were claims he heard voices and believed that extremely low frequency electromagnetic waves somehow controlled or influenced his actions.

The shooter was granted access to the facility because he had a valid pass to enter the Yard, designated a gun free zone. He smuggled a Remington 870 shotgun — with a sawed off barrel and disassembled at the time — and Beretta 92 pistol inside the facility by storing them inside a bag. He went to the fourth floor, where he worked the prior week, assembled the shotgun inside the bathroom, and then proceeded to kill 12 people and wound eight.