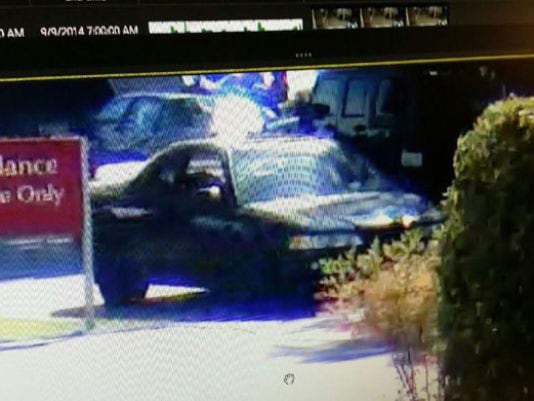 Authorities did not get a good description of the woman driving the getaway car, but they said the car stood out because of its very sloppily painted rear spoiler. (Photo: King5)

A would-be robber’s plan for some quick cash Monday afternoon was foiled when the man was confronted by an armored car guard with a gun outside a Bank of America in Lakewood, Washington.

Bank customer Blaine Rees, knew something wasn’t right when he saw the man standing outside of the bank. His first giveaway likely being the eye-catching disguise.

“He looked really, I mean just really, really out of place. I mean, not a little bit, a lot,” Rees told reporters. “He had a weird winter hat on and big sunglasses and a big fake beard. He had these big curls in his beard.”

So Rees warned bank employees of the suspicious man outside.

However, an armored car guard was inside the bank vault at the time and upon hearing the commotion went to confront the man outside. But as the guard came near the suspect, the suspect pulled out a gun. At that point, the guard grabbed his own gun and opened fire, striking the suspect once in the head and once in the thigh.

With the help of a female accomplice, the suspect fled after being shot.

A short time later, police received a call from a nearby hospital about a gunshot victim who had just showed up for medical treatment. Authorities believed it was the same man.

The female accomplice was still at large and was only described as a black female with a ponytail. She was driving a dark-colored Acura with a poorly painted white spoiler on the back.

No one inside the bank was injured during the incident and no money was taken. It’s unclear if the man was targeting the bank or the armored car.