Justice Department to rebuild trust between police and community 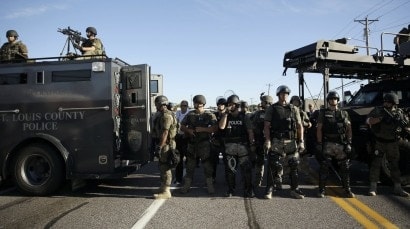 The Department of Justice hopes the initiative will build trust between police agencies and the communities they serve. (Photo: Jeff Roberson/AP)

In light of the recent protests, riots and eventual police action in Ferguson, Missouri, the U.S. Justice Department announced on Thursday the launch of a national program to rebuild trust between police departments and the communities they serve.

The National Initiative for Building Community Trust and Justice was funded through a three-year, $4.75 million grant and will focus on training, evidence-based strategies policy development and research, the DOJ said.

“The events in Ferguson reminded us that we cannot allow tensions, which are present in so many neighborhoods across America, to go unresolved,” said Attorney General Eric Holder in a statement.  “As law enforcement leaders, each of us has an essential obligation – and a unique opportunity – to ensure fairness, eliminate bias, and build community engagement.

The National Initiative for Building Community Trust and Justice represents a major step forward in resolving long standing tensions in many of America’s communities and it will allow us to build on the pioneering work that the Justice Department and our law enforcement partners across the country are already doing to strengthen some of our nation’s most challenged areas.”

The program will launch in five pilot communities across the country and will establish a knowledge base for law enforcement, the justice system and community leaders.

The pilot program will be led by a consortium of experts from John Jay College of Criminal Justice.  Yale Law School, the Center for Policing Equity at UCLA and the Urban institute.

Advisors from the Office of Justice Programs, the Office of Community Oriented Policing Services, the Civil Rights Division and the Community Relations Service will oversee the initiative, which was formed under recommendation from the My Brother’s Keeper Task Force report released in May.