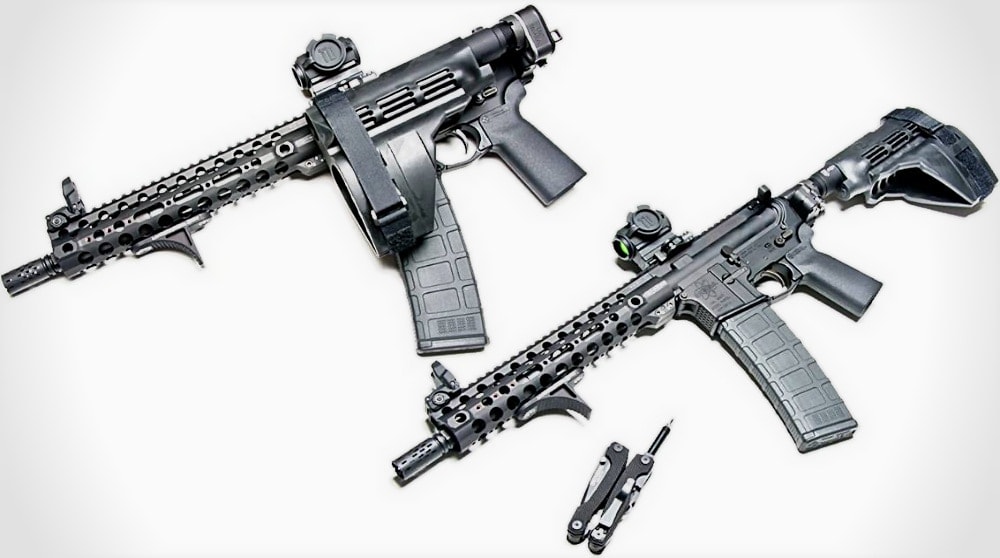 Citing a number of improvements and an new, all-steel design, Law Tactical is pleased to announce its third-generation Folding Stock Adapter for AR-15 rifles. These adapters allow users fold the buffer assembly and stock to the side for a truly compact AR package.

Folding stocks on ARs have historically required completely proprietary, non-standard recoil assemblies, bolt carrier groups and usually upper receivers as well. Law Tactical’s solution is designed to work with existing AR-15 components and opens and closes with the push of a button.

These stock adapters work with standard buffer assemblies and direct-impingement and popular piston-driven gas systems although they won’t be semi-automatic firearms with the buffer assembly folded to the side for obvious reasons. The adapter locks the bolt carrier group in battery as long as the stock and buffer assembly is folded.

Still, shooting with the stock to the side isn’t ideal, the gun is limited to the round in the chamber. The buffer assembly then must be locked open and the action manually-cycled to ready the gun for another shot. But it’s safe and in an unusual sense, reliable.

Earlier aluminum designs were a bit lighter but bulkier, with a large hinge that prevented some methods of charging handle manipulation. And unlike Gen 2 and Gen 1 adapters, the third-gen adapter is designed to withstand single shots in a pinch if necessary (or even unintentionally). It will not cycle, but it won’t damage the adapter or buffer tower extension, within reason.

The third-gen FSA is also a much simpler system, both in terms of installation and maintenance. In other words, the Gen 3 FSA is ready for the mainstream.

The adapter adds about 11 ounces to the weight of the AR. Close to the rear of the firearm, this shouldn’t affect pointability and handling appreciably. It is constructed from machined 4140 tool steel and is compatible with semi-auto and full-auto firearms as well as AR-15- and AR-10-pattern guns.

Included with each adapter is a drop-in bolt carrier extension. A departure from older designs that needed to be screwed into place, the third-gen extension is held in place with simple, replaceable o-rings. This also helps keep debris from entering the action through the rear of the buffer tower.

As a bonus, the adapter sports an ambidextrous quick-detach sling point, a handy and welcome inclusion. Overall the entire assembly adds 1.3 inches to the length of pull, which will disappear into most collapsible stocks.

While these folding stock adapters are handy for rifles and carbines, they are begging to be installed on AR-15 pistols and SBRs. They make these already compact packages even smaller, tiny enough to slip into the most discreet and unassuming carry bags and cases.

Some people are taking things even further with modular barrel systems, fitting a complete AR into a satchel or day bag.

For more info about the Law Tactical Gen 3 Folding Stock Adapter head over to the Military Times’ Gear Scout, the Military Arms Channel Facebook page and to order one for your current or next AR build, go to the Law Tactical product page. The Gen 3 FSA runs $219, but for the right project, is a must-have accessory.