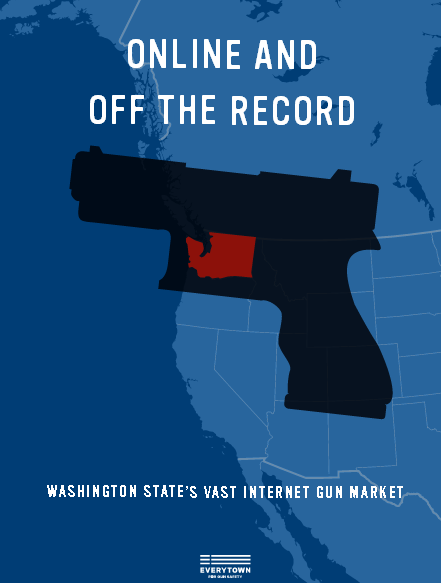 Everytown for Gun Safety has released a new study in which they contend that one of ten online gun buyers in Washington State are criminals. (Photo: Everytown)

After reviewing five online sites that list firearms for private sales in Washington state, Everytown for Gun Safety released a report this week contending that 10 percent of sales are to those who can’t have a gun.

The report, Online and Off the Record, a 15-page look into what Everytown calls, Washington state’s “vast internet gun market,” is being used to help draw attention to the looming ballot initiatives in six weeks on expanded background checks in the Evergreen State. Everytown and supporters of I-594, argue they are attempting to close a loophole in state law that allows for private sales without a background check.

In the study, conducted over a 138-day period of online gun classifieds sites, the group scraped thousands of ads for firearms being bought or sold by private sellers, and then extrapolated enough data to cite that eight out of 81 individuals researched were possibly prohibited from firearms possession.

“Of the identified individuals seeking guns in unlicensed online sales in Washington, nearly one in ten (8 of 81) had been convicted of crimes that prohibited them from possessing firearms,” contends the report.

By further weeding out guns for sale and ads that had no identifying geographic or personal data, Everytown then concentrated on the 81 remaining posts that met its criteria. Researchers then conducted criminal records searches to look for past criminal convictions, protection orders or any other public data that would, in general, prohibit that would-be buyer from possession of a firearm under the law.

The investigation concludes that the incidence of apparently barred individuals seeking guns, compared to the study’s data compilation, then multiplied over a one-year period, would deliver a massive arsenal into the criminal underworld.

“At this prevalence, gun sales transacted on just five websites put an estimated 4,400 guns into the hands of felons and domestic abusers in Washington — and likely many more — in this year alone,” reads the report.

However, not all would agree with Everytown’s statistical analysis.

Dave Workman with the Examiner did the math on Everytown’s research. In an article posted Thursday, Workman carefully pointed out that of the 16,739 on-line advertisements, the group found just eight individuals that had been convicted of crimes that prohibited them from possessing firearms, or about 0.005 percent, not the much larger 10 percent figure claimed by Everytown.

Further study of the eight cases held up as an example of Washington’s “gun loophole” shows that Everytown’s civilian investigators used anecdotal evidence to identify potential buyers and sellers, such as reverse lookup phone data and email addresses, not positive identification.

“Investigators did not make follow-up calls to apparently non-prohibited buyers to ensure that they were, in fact, the person who placed the ad,” the report said.

In addition, in the case of one of the eight individuals believed to be prohibited, Everytown’s researchers discovered on a public records search that he had, “successfully overturned his prohibition under state law, but the nature of his conviction still prohibited him from possessing firearms under federal law.”

As a conclusion to the study, Everytown recommended that Washington voters should cast their ballots in favor of I-594, the 18-page expanded background check initiative set for November, to preclude further instances of guns falling into the wrong hands.

“While they take a look at the number of possible ads selling firearms, it doesn’t mean those people are disqualified or criminals,” Alan Gottlieb, chairman of the Citizens Committee for the Right to Keep and Bear Arms, told Guns.com Thursday. “It only cited a handful of examples where there was an alleged illegal transaction.”

Gottlieb is an outspoken proponent of a counter ballot initiative, I-591, which aims to maintain the current status quo in Washington state.

According to FBI crime statistics for 2012, Washington’s 106 homicides by firearm are nearly half that of Arizona (211) and Tennessee (254), states who share similar total population figures. These comparably low crime rates have allowed grass-roots Second Amendment activists, who have pumped some $1 million into the to fight to keep the current laws, to claim they work just fine.

The I-594 background check initiative, on the other hand, has drawn the support of billionaire backers in recent weeks. Just five donors, including Microsoft alumni Bill Gates and Paul Allen, have contributed nearly $4 million directly to Seattle-based Washington Alliance for Gun Responsibility. Michael Bloomberg’s Everytown group has contributed another million.

The National Rifle Association, meanwhile, is backing a Vote No 594 campaign that contends the background check measure’s language is flawed. The NRA, citing analysis from Second Amendment scholar David Kopel, argues that, if passed, 594 could create a backdoor gun registry that would preclude events as simple as loaning a gun to someone at the range.

Although Everytown’s study targeted online sites, representatives of the expanded background check campaign told Guns.com that Armslist and others would not be effected by I-594, except for the respect that the actual transfer would have to take place through a licensed dealer following a check.

Indeed, a panel from the U.S. Court of Appeals for the 7th Circuit recently held that Armslist was not liable for a gun sold through its platform, ironically by a seller in Washington State, which was later used in a murder.

To the website’s credit, it informs sellers that he or she is responsible for obeying federal and state laws before finalizing a transaction, and directs sellers to contact the Bureau of Alcohol, Tobacco, Firearms and Explosives for any questions.

“We don’t want to get in the way of anybody’s commerce, but we want to make sure that if you are selling a gun to someone that you make sure that they’re not prohibited from having it,” Zack Silk, campaign manager for Yes on 594, told Guns.com at a press conference earlier this week.

Everytown’s argument for expanded checks was given a boost Thursday when the Seattle Post-Intelligencer obtained court documents that claim a convicted felon, Michael Joanen, bought and sold numerous firearms through social media after he was barred from possessing guns.

“Had he walked into a licensed gun dealer and tried to buy a gun, he would have failed the background check,” Erika Soto-Lamb, communications director for Everytown, told Guns.com Thursday. “But over the Internet — where background checks are not required — Joanen found a haven for gun commerce.”

Soto-Lamb further held up Joanen’s case as an example of why Everytown supports increased checks on private sales.

“The evidence shows that criminals flock to the vast online market for guns because they know they will not be required to go through a background check,” said Soto-Lamb.

With all of the rhetoric on both sides of the issue, it will be up to voters to decide yes or no on I-594 and I-591. A July Elway poll found that 70 percent of those asked supported the expanded background check initiative. However, 46 percent chose to support the opposing status-quo initiative, which was inside the margin of error of 4.5 percent to make a majority.

To add to the confusion, 32 percent of those polled voiced support to both contradictory measures.

Should both measures pass, the courts could ultimately decide which path Washington’s background check question would take.

The general election is scheduled for Nov. 4.

Daniel Terrill contributed to this article.