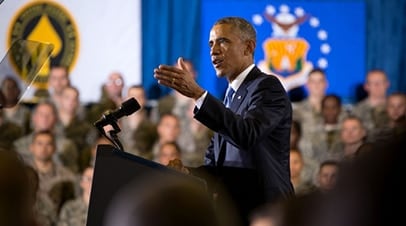 In the battle to regain lost ground in Iraq, the U.S. Senate on Thursday approved President Obama’s plan to arm Syrian rebels to help “degrade and destroy” the extremist group called the Islamic State of Iraq and Syria.

The U.S. Air Force has launched more than 160 airstrikes against the jihadists, allowing Kurdish forces to reclaim territory in the region, the White House said.

“As your commander-in-chief, I will not commit you, and the rest of our armed forces, to fighting another ground war in Iraq,” the President told servicemembers at MacDill Air Force Base on Wednesday.

The UK and France have joined the U.S.-led coalition with aircraft of their own patrolling Iraqi skies and Saudi Arabia has offered up some of its facilities and agreed to help train and equip Syrian opposition forces, according to the White House.

”Our intelligence community … has not yet detected specific plots from these terrorists against America, but its leaders have repeatedly threatened America and our allies and right now these terrorists pose a threat to the people of Iraq, the people of Syria, the broader Middle East, including our personnel, our embassies, our consulates, our facilities there,” the Obama said.

The president often refers to the group as “ISIL,” or the Islamic State of Iraq and the Levant — the latter referring to an area that encompasses Syria, parts of southern Turkey, Egypt, Lebanon, Israel, the Palestinian territories and Jordan — an area the jihadist group plans on controlling.