How a 77-year-old Law Makes Every Shooter a Conservationist 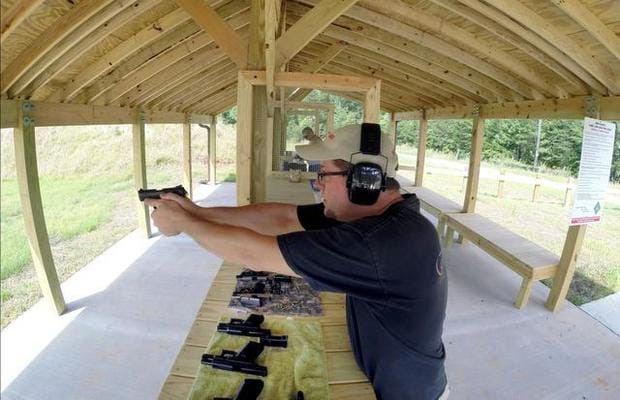 Jamie Wells fires gets some trigger time in at a new public shooting range in North Carolina, one of three paid for by Pittman-Robertson funding collected on a tax of the firearms industry. (Photo: Chris Seward/News Observer)

A little-known Depression-era law has been responsible for pumping more than $8 billion into wildlife conservation, hunter’s education and shooting ranges, with every bullet and gun sold making a difference.

The legislation, the Wildlife Restoration Act of 1937, commonly referred to as Pittman–Robertson after the two lawmakers pivotal to its passage, uses an excise tax levied on all firearms and ammunition sold or imported into the county to perform conservation-related tasks as varied as restoring elk habitat to funding safety programs, and establishing public shooting ranges. Paid for by manufacturers and producers, the fund has been pushed into overdrive in recent years because of a spike in gun and ammunition sales.

In 2014, $760 million was apportioned by the U.S. Fish and Wildlife Service from Pittman Robertson funds. This is more than twice the $371 million allocated in 2012.

According to the News Observer, in North Carolina alone this year, the state received more than $19.9 million, a figure over three times as much as in 2007. The funds have been used for a number of new projects including a large public shooting range in the Yanceyville area. Set up with multiple covered 100-yard rifle and 25-yard handgun lanes, the range is free to the public. It’s the third of its kind constructed by the N.C. Wildlife Resources Commission with Pittman-Robertson funds in the state this year.

However, it is not only ranges that are being funded. The NCWRC is using its federal windfall to take on new projects including roads into game lands to allow more use by the public, parking lots, markers and signage.

“A lot of this work we haven’t been able to do because of a lack of funds,” said Erik Christofferson, head of the engineering and lands management division for NCWRC. “We’ve been able to put this money back on the ground for the public to enjoy.”

This sort of clear return on investment, paid for through taxes on firearms and ammunition, is a cyclical relationship in which gun owners and users are perhaps the country’s most unsung conservationists.

“The North Carolina example shows how Pittman-Robertson funding continues to provide a direct link between hunters and target shooters and the resources required to enhance the public’s opportunities to hunt and shoot,” Michael Bazinet, director of public affairs for the National Shooting Sports Foundation, told Guns.com this week. “This ‘user-pays’ model works very well because sportsmen and women and the industries that serve them have always been willing to pay to expand and protect America’s hunting, shooting and conservation heritage.”

Enacted 77 years ago this month, Pittman-Robertson is credited with largely saving the sport of hunting in the country and bringing numerous species back from the brink of extinction. At the time of its enactment, populations of deer had shrunk to such minuscule levels that 11 states had no season on the animals open to sportsmen. Those that did have seasons were very limited. For instance, Missouri’s was just three days long. Today deer hunters in the Show Me State enjoy no less than 122 days between archery and firearm seasons, which began in mid-September and run to mid-January.

This is due to the more than $8 billion funneled from the firearms and ammunition industry, through the federal government, and into the various state conservation agencies. According to a fact sheet on Pittman-Robertson by the NSSF, 11 percent of the wholesale price of long guns and ammunition, and 10 percent of each handgun is collected via the ATF and deposited into the Wildlife Restoration Trust Fund, which is administered by USFWS. The tax is assessed no matter what the intended purpose of the gun or ammunition load, which means that, in the eyes of Pittman-Robertson at least, all firearms are created equal.

These funds are doled out in a formula with each state getting a share relative to the number of licensed hunters in the state, as well as another share based on the state’s relative geographical size. Almost half of the funds are set aside for hunters education, which has wide-reaching benefits not just for sporting purposes but in terms of personal protection as many states accept hunter’s ed certificates as proof of firearms safety training required to apply for a concealed carry permit.

With the huge influx of cash available, states are now making capital improvements and expansions to ensure they have lasting results should future Pittman-Robertson disbursements sink on the heels of decreased firearms and ammunition sales from 2013 figures.

“I can assure you it won’t last,” Brad Gunn, the NCWRC’s Pittman-Robertson, said. “Unless gun and ammunition issues become an issue in the next presidential race.”