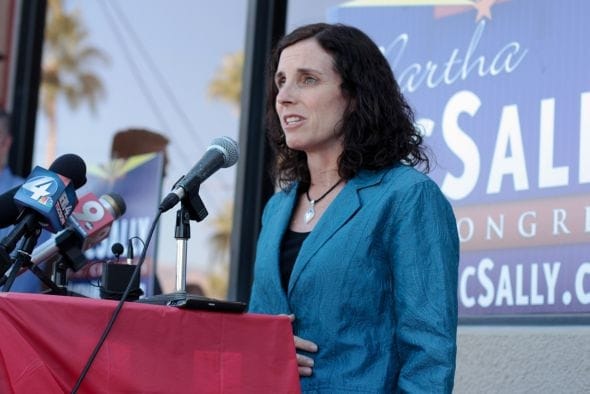 In the heated Arizona Congressional race, an ad attacking a Republican candidate paid for by Americans for Responsible Solutions is sparking controversy.

The means of support chosen by ARS? A 30-second clip entitled “Stalker Gap” that contends Republican candidate Martha McSally “opposes making it harder for stalkers to get a gun.”

However, McSally, who was the victim of a violent stalker herself, is calling the ad personally offensive and is demanding it be taken down.

“As someone who’s experienced being stalked, I know what it feels like to worry constantly about when and where your stalker will appear next and what he’ll do,” McSally said in statement. “I’ve had threats made against me and wasn’t even safe in my own home or my car where my stalker broke in and held me in a hostage-like situation. I’m not alone in having to defend myself against a stalker. Countless women go through the same suffering and intimidation, and for an outside group to tie me to the tragic occurrence of a stalker killing his victim, is not only personally offensive, it’s degrading to all women and victims who have experienced this pain.”

A former Air Force colonel with 325 combat hours in the A-10 “Warthog” attack aircraft, McSally is launching a counter offensive against not only ARS, but also Barber. She contends the congressman has not distanced himself from the controversial ads, which have been termed “vile” by the editorial board of a prominent state newspaper.

“These false and malicious ads are being run by Congressman Barber’s political allies, and for him to remain silent in their wake is damning,” said McSally, who remains steadfast that she has been outspoken about enforcing laws to keep guns out of the hands of criminals and stalkers. “I call on him to show that the integrity of women is more important than political gain. He needs to denounce these degrading ads and demand they be pulled down.”

The Washington Post named Barber earlier this month as one of the top 10 most vulnerable members of the House up for reelection this November. Citing that the incumbent only narrowly edged out McSally in 2012 in a district that voted Republican in the last presidential election, the Post places him near the top of the list, only edged out by New York GOP Congressman Michael Grimm, who is currently under multiple criminal indictments.

Two weeks before the stalker ad was published, ARS posted a separate advertisement that claimed McSally supported what the PAC terms “the gun show loophole” by being against expanded background checks.

For her part, McSally is outspoken in her opposition to increased checks on private sales, saying on the record in 2012, “The law is clearly based on the Second Amendment that we all have the right to keep and bear arms. And I have the right as a private citizen to sell my possession to anyone I want to. It’s my lawful right. So, just like I can sell my car, I can sell my gun. And so, that’s the law, and that’s not a loophole. It’s freedom.”

Americans for Responsible Solutions is standing behind its ads.

In a statement to the Arizona Republic, ARS executive director Hayley Zachary argues Arizona voters “deserve to know that Martha McSally refuses to support common-sense steps like expanding background checks to keep guns out of stalkers’ hands, even though nearly everyone in Southern Arizona supports these middle-of-the road policies.”

The Arizona general election is scheduled for Nov. 4.