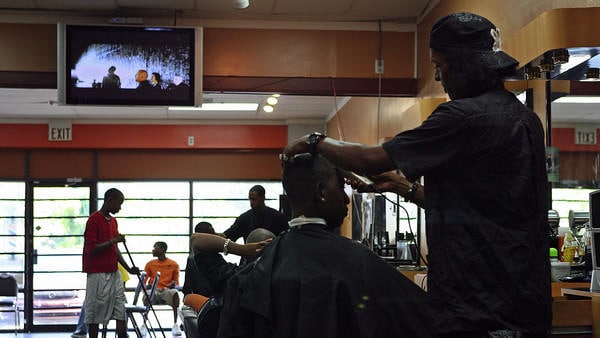 The Strictly Skillz barbershop in Orlando was the site of a 2010 raid by state and local law enforcement that a federal court found to be excessive. (Photo: Orlando Sentinel)

A panel of judges chastised Florida sheriffs for a routine inspection of a barbershop that included masked officers, handcuffs, and illegal search as being a violation of the Constitution.

The three-judge panel held that deputes of the Orange County Sheriff’s Office violated the civil rights of those inside an Orlando barber shop during a warrantless raid of the business conducted in 2010. The court maintained that the deputies violated the barber’s Fourth Amendment rights to be free from unreasonable searches and seizures as they served as the “muscle” for a routine inspection of the business by the Florida Department of Business and Professional Regulation (DBPR).

Although the action had been ostensibly to check the licenses of the barbers as allowed by law, court documents tell of an armored and masked group of deputies who stormed the business with guns drawn, barking orders.

“We first held nineteen years ago that conducting a run-of-the-mill administrative inspection as though it is a criminal raid, when no indication exists that safety will be threatened by the inspection, violates clearly established Fourth Amendment rights,” wrote Judge Robin S. Rosenbaum of the U.S. Court of Appeals for the Eleventh Circuit in the panel’s ruling on Berry v Leslie last week.

“We reaffirmed that principle in 2007 when we held that other deputies of the very same Orange County Sheriff’s Office who participated in a similar warrantless criminal raid under the guise of executing an administrative inspection were not entitled to qualified immunity…Today, we repeat that same message once again. We hope that the third time will be the charm,” Rosenbaum said.

Rosenbaum, a recent appointment from President Obama, and Judge Charles R. Wilson, an appointment by President Clinton, held the majority of the three-jurist panel. Judge William H. Pryor, a 2004 appointment of President George W. Bush, dissented on part and concurred on part.

The action that gave birth to the federal lawsuit occurred on August 21, 2010 when members of the OCSO descended on Strictly Skillz barbershop which, being just before the first day of school, was packed with customers. According to court documents, eight to ten deputies, including narcotics agents, blocked the entrances and exits so that no one could leave, then handcuffed and searched the occupants of the business. This was so that regulatory inspectors from the DBPR could verify that the facility and those who were working there were properly licensed by the state to give haircuts.

Barbering without a license is a second-degree misdemeanor in Florida. Although a series of similar raids conducted by the DBPR on nine other shops led to 35 arrests on the seldom-used charge, the barbers at Strictly Skillz were within the law.

A number of the barbers were handcuffed and detained for approximately an hour while deputies, not DBPR inspectors, searched their workstations and parts of the building that were not connected with cutting hair, although the agency had not procured a search warrant.

One of the barbers, a lawful concealed carry permit holder, was disarmed after he was handcuffed. According to court documents, when the legally armed barber asked deputies what he had done wrong, he was told, “It’s a pretty big book, I’m pretty sure I can find something in here to take you to jail for.”

When OCSO agents and deputies in fact found no violations, the barbers were released. No citations were issued or charges filed by either DBPR or deputies as a result of the inspection.

The court was not impressed by the fact DBPR field inspectors had conducted a walk-through of Strictly Skillz just two days before the raid, in which they verified that the barbers’ licenses were valid and found no violations. DBPR is permitted to inspect a barbershop only once every two years. Judge Rosenbaum wrote that this fact made the “show of force and search were all the more unreasonable.”

In the end, the majority of the panel held that the action the deputies named as defendants in the lawsuit were involved in was not an inspection for barber licenses, which they were not authorized to perform, but an unlawful, warrantless search. As such, they affirmed a lower court’s ruling that the deputies were not immune from civil liability from the barber plantiffs.

“Here — where the authorized purpose of the inspection was simply to check for barbering licenses and sanitation violations, and there is no indication that the defendants had any reason to believe that the inspection would be met with violence — the manner in which the supposed inspection of Strictly Skillz was undertaken was unreasonable from its inception and was, in fact, a search,” wrote Rosenbaum.

Judge Pryor, in his dissent, concurred with the majority that an unlawful search was held that violated the barber’s civil rights, however he argued that the argument presented against one of the deputies was not compelling enough to rule against all of them.

According to the Orlando Sentinel, an internal review of the raid on Strickly Skillz by the DBPR led to a settlement with the barbers after the agency found evidence of wrongdoing by three of its employees, who were terminated.