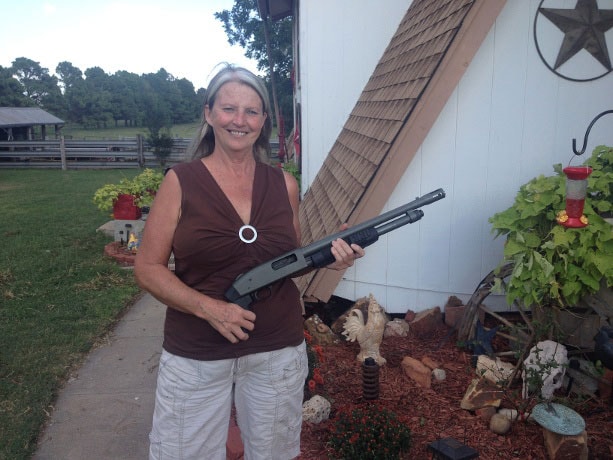 The shotgun Kouba received for Mother’s Day turned out to be much more handy than a vase of flowers. (Photo: KOCO)

An attempted break-in at an El Reno, Oklahoma, home Thursday night left the suspect with a little more than he was after when the homeowner shot him in the buttocks with buckshot. But just went he thought that was it, he found himself tangled in an electric fence.

Cathy Kouba told reporters that she was awakened during the night when her security alarm went off. Kouba explained how her motherly instincts kicked in when she realized someone was attempting to get in through the back door.

“I have a daughter that’s handicapped and she was asleep on the bottom floor,” Kouba said. “And so for the fear of her being hurt, motherly instincts kick in and, you know, I worked hard for what I’ve got. And you’re not going to come and take it away from me.”

So Kouba grabbed her shotgun and ran out of the front door to confront the suspect. Once outside, she saw that the back door had been kicked in. She fired a shot at the suspect, who ran off through the back yard, but not before becoming tangled in the Kouba’s electric fence.

Kouba said the suspect left a trail of blood and, although he got away, she believes authorities will catch up to him eventually.

Authorities also said that the suspect left clear footprints at the back door, which will help in identifying him.

Neighbors said break-ins have been on the rise in the area lately. Kouba’s son just gave her the shotgun for Mother’s Day, which she said was the best present she’s ever received.