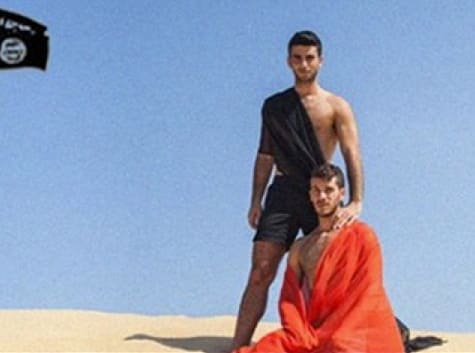 This controversial promotion sparked outrage by parodying the beheading of James Foley in a party promotion for Israeli gay club Haoman 17. The club owners have apologized, saying they are opposed to violence of any kind.

Their intent was to put their contempt for ISIS on display and prove to the world that no one at the Haoman 17 Club was afraid of ISIS, but the event, and this promo poster, backfired.

“We are trying to react to current events. We have been doing it for a number of years. But we reject violence in any form and that includes the (execution) videos intended to scare the world,” explained a post on their Facebook page. “Therefore we also refuse to participate with this fear and refuse to become hysterical. This is satire, and our way of showing our contempt of them and their videos.”

They mocked ISIS with this message. “As the new Islamic State gains traction in the Middle East, we at Drek have decided to give in to Sharia law and cheer the stubborn Daesh.”

Calling ISIS “Daesh” is a serious insult to the terrorist organization. It’s a term used to describe bigots and zealots and it undermines their position as an “Islamic state.” It’s the term they hate the most.