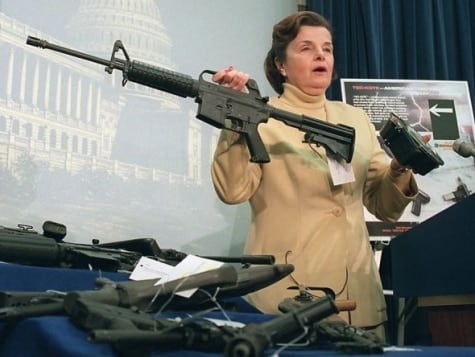 The criminologist behind the key statistic that the lawmaker cites as making it effective is debunking Sen. Dianne Feinstein’s decade-long federal ban on “assault weapons.”

The legislation in question, the Assault Weapons Ban of 1994 sunsetted a decade ago, yet Feinstein has time and time again tried to bring it back, most recently following the tragic mass murder at Sandy Hook in 2012. In a release this month from the senator on the anniversary of the original ban, which she helped craft, she cites that a 6.7 percent reduction in total gun murders proved that the prohibition on firearms meeting a list of mainly cosmetic features, worked.

Only the criminologist who came up with that figure long ago backed away from it, and has since come to the conclusion that the ban did not save lives.

According to ProPublica, who spoke with Dr. Christopher Koper, the co-author of the 1997 report that Feinstein drew her numbers from, the data was tentative at the time and has since been overruled by subsequent studies conducted as early as 2004.

“The weight of evidence that was gathered and analyzed across the two reports suggested that initial drop in the gun murder rate must have been due to other factors besides the assault weapons ban,” Koper said.

In response to the suggestion from Koper that the data disproves Feinstein’s assertions that the ban was effective, the senator told ProPublica, “Let me be clear: Assault weapons allow criminals to fire more shots, wound and kill more individuals and inflict greater damage. The research supports that.”