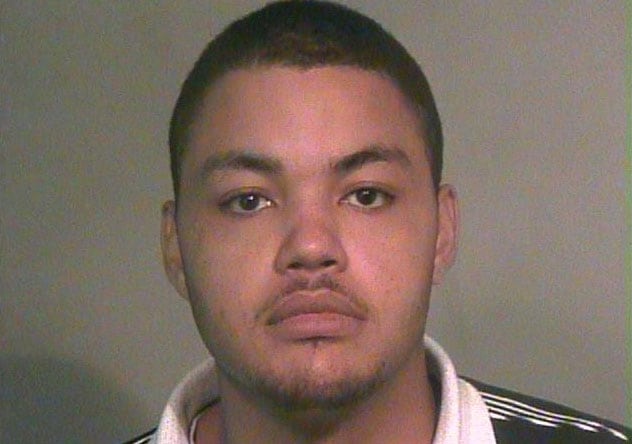 It’s unclear at this point what charges Leonard Henry will face. (Photo: News 9)

An 11-year-old girl likely saved her mother’s life and protected four other children when she shot her mother’s ex-boyfriend during a violent domestic dispute early Wednesday morning in Oklahoma City.

Local media reported that Leonard Henry, 25, broke into the home of his ex-girlfriend, Brandy Moreno, around 4:30 a.m. Moreno, who is currently pregnant with Henry’s baby, was home with her five children at the time.

Once Henry was inside, a physical altercation ensued and Henry allegedly stabbed Moreno multiple times in the eye, neck and chest. During the altercation one child called 911 and the 11-year-old, identified as Jayda Milsap, grabbed her mother’s handgun and fired several shots at Henry, striking him at least twice.

Henry ran out of the house, leaving a trail of blood behind him. Responding officers found him in the street a short distance from the home.

Henry and Moreno were both transported to a local hospital and both are expected to survive. Henry will face charges once released from the hospital.

Investigators said there was clear evidence of a struggle inside the home.

Authorities also confirmed that Moreno had filed a protective order against Henry just last week, but the paper did nothing to keep him away. In fact, neighbors said Henry had been to the home several times in the past week.

“The guy has been coming around here,” Moreno’s neighbor, Lataisha Lewis, told reporters. “He’s been going around her trailer and going to her door, knocking on her window and beating real hard. Ran up his vehicle motors and things like that. And then this morning we hear the boom boom and the commotion and the breaking of the glass and come outside and see what’s going on.”

Carolyn Marsee, another neighbor, said she heard the gunshots and called the young girl a “hero” for her actions.

“(Moreno) just showed the girl how to use the gun last week so she could protect herself,” Marsee said.

Apparently Moreno took out the protective order in an effort to keep herself and her children safe. According to the protective order, Moreno “witnessed Henry sexually molesting” the children. After further investigation it was discovered that the abuse had apparently gone on for years. The order apparently went into great detail about the abuse, explaining that Henry had held a gun to the head of one of the girls and threatened to “kill her if she didn’t keep their secret,” which was that he had “photographs of her private parts.”

Moreno filed the protective order because she “was afraid he is going to hurt her and the children because she reported the abuse.”

Henry has a prior criminal history, which includes charges for domestic abuse assault and battery. Henry’s father is currently serving prison time for possessing child pornography.

Marsee said she doesn’t care if Henry dies and she felt the girl did the right thing.

“I don’t care what anybody says,” Marsee said. “She saved her mother and her brothers and sisters.”