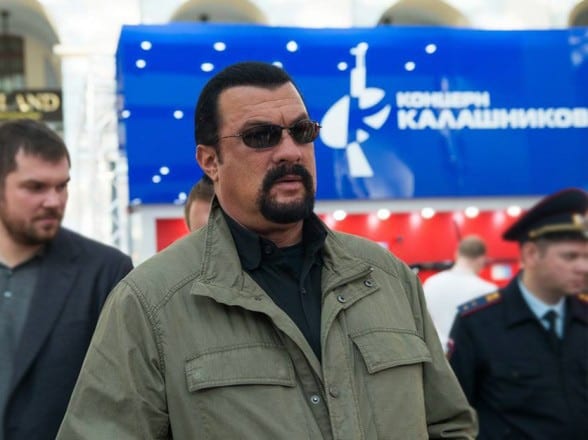 Steven Seagal also starred in the short-lived “Steven Seagal: Lawman,” a reality show following him as a reserve sheriff’s deputy in Louisiana and Arizona. (Photo: Rostec)

The Russian-owned Kalashnikov Concern set the record straight about its relationship with “Under Siege 2: Dark Territory” actor Steven Seagal.

“Some media reports that the Kalashnikov Concern has declined the opportunity to cooperate with Hollywood actor Steven Seagal are untrue,” the company said in a statement.

“The U.S. sanctions have in no way influenced our decision to cooperate with Steven Seagal.  Currently no prior agreements or contracts have been concluded with the actor.”

In other words, the company is undecided about continuing the relationship. Although the company is in the process of revising its operations, it is still open for hiring a brand ambassador in the future.

Kalashnikov is owned by the Russian-government run Rostec Corporation, which recently sold majority shares of another gun factory to a private businessman as part of an overall strategy to revive the ailing company, boost declining sales and reportedly skirt Western sanctions.

Earlier this year the U.S. Department of Treasury said sanctions against Russia would ban the import of Kalashnikov branded rifles, among other items, into the U.S.

Seagal, who earned a 7th degree black belt in Akido, joined Kalashnikov as a spokesman in June 2013 and he represented them at the 2014 Shooting Hunting Outdoor Trade Show in Las Vegas.