15 injured in Florida nightclub shooting, some as young as 11 (VIDEO) 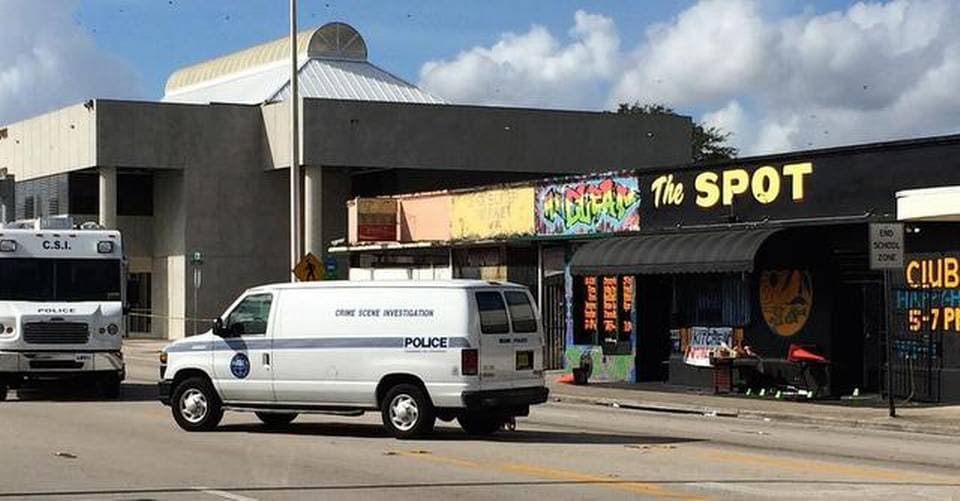 Police are looking for suspects following the injury of 15 people, mainly teenagers at the Spot nightclub in Miami Sunday morning. (Photo: Miami Herald)

Unidentified gunmen opened fire at The Spot nightclub in the Liberty City area of Miami early Sunday morning, leading to the injury of 15 people, mainly teenagers.

Upon arrival at the chaotic scene, first responders transported some to area hospitals while others self-admitted. The most seriously injured, Trevon Simmons, 15, is listed in critical but stable condition according to WPLG. Further, it is unclear if all those injured were by gunfire or other causes. Miami police are conducting an investigation but currently details are scarce, without even a released description of the alleged gunmen at this time. Authorities estimate that as many as 100 rounds may have been fired according to witness statements, and remarkably there were no deaths.

Police officials detailed the injured ranged in age from 11 to 25, with many being minor teenagers. As the shooting occurred just before 2 a.m., those under 17 were in violation of the countywide midnight curfew for unaccompanied youths.

The club, which was issued a liquor license in April, has not had any incidents of this sort in the past and only recently began allowing teenage parties on the weekend. It was estimated that nearly 100 were in attendance when the incident occurred Sunday.

Miami Police Department spokesperson Frederica Burden, explained to the Miami Herald that investigators are trying to determine just what occurred at the nightclub including why the gunfire erupted, who the alleged shooters were, and exactly how many were present.

“This has baffled everybody,” said Burden. “We are just trying to figure out what’s going on.”

Gun control groups, meanwhile, are pointing out that the Miami incident could be the by-product of firearms and liquor.

“This is another sad example of how guns and alcohol just don’t mix,” Erika Soto Lamb, communications director for Everytown for Gun Safety told Guns.com Sunday. “There is strong evidence that those under the influence of alcohol are at an elevated risk of violent behavior, including gun violence. Americans recognize this danger and overwhelmingly oppose allowing people to bring guns into establishments where alcohol is present.”

However, those with guns at The Spot may have not been in accordance with the law even before the first shots rang out. Carry of a firearm without a concealed carry permit is illegal and under Florida statues, lawful concealed permit holders may not carry in an establishment that is licensed to serve alcohol if the business is “primarily devoted” to that function.