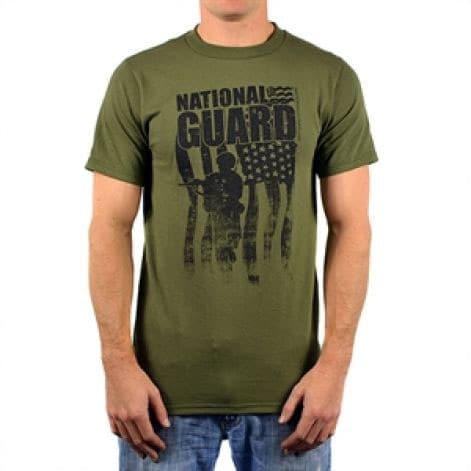 A National Guard recruiter was asked to stop handing out T-shirts at a New York high school earlier this month after the shirts were deemed inappropriate because — since they had an image of a gun — they violated the school’s dress code.

Ravena-Coeymans-Selkirk High School in Ravena has a strict dress code which bars students from wearing any type of clothing that promotes the use of alcohol, tobacco or illegal drugs or supports any other illegal or violent activities.

“They’re not allowed to wear anything that would have a weapon on it,” district Interim Superintendent Alan McCartney told the Times Union. “Our main purpose is education. Wearing pictures of weapons brings to mind those things in our society that are not pertinent to education.”

But not everyone agrees that violence is promoted by the image, which features the words “National Guard” atop an American flag and a soldier holding a rifle.

“The way I see it, the men and women who serve and protect us, they don’t walk around without weapons, unfortunately they don’t.” Jennifer Delisle, whose children attend the school, told a local CBS affiliate. “And there’s a big difference between violent crime and people who serve us and keep us safe and keep our freedom.”

The recruiter, whose name has not been released, stopped handing the shirts out when asked, but there are conflicting reports about whether or not the students who had already received the shirts and were wearing them were asked to take them off.

McCartney said that in the future, T-shirts and other materials handed out by recruiters will be checked beforehand to ensure they don’t violate any of the school’s policies. McCartney added that weapons depicted on such materials become a “focal point,” but again, DeLisle disagreed.

“When I first saw the shirt, I saw the American flag, the silhouette of the solider, I didn’t even notice the gun and the children I’ve talked to said it had nothing to do with the gun being on it, it had to do with the honor and respect to the National Guard,” DeLisle said.

Nonetheless, McCartney confirmed that the request to the recruiter meant no disrespect.