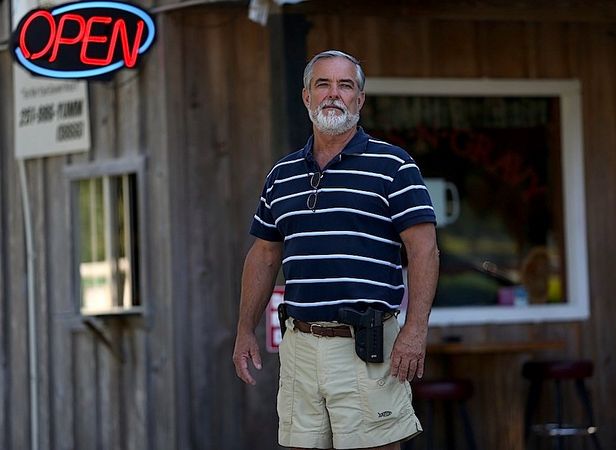 Doug Stewart, owner of Grits N Gravy, an Alabama eatery, open carries at work, “Because a police officer is too heavy.” (Photo: AL.com)

Restaurant owner Doug Stewart serves up grits, gravy and biscuits in his Elberta, Alabama, eatery every morning while open-carrying his 9mm Sig.

Stewart, besides his handgun carried cross-draw style on his waist, also keeps a 12-gauge shotgun within reach of the cash register at Grits N Gravy, his popular diner just outside of Mobile. While Elberta, population 1,498, is not a high-crime area, the small restaurant did suffer an armed robbery in 2012. However, Stewart contends that he isn’t armed just for protection, but in an exercise of his Second Amendment rights.

“Men have fought and died for that right,” Stewart told AL.com. “Your rights are kind of like your muscle. If you don’t exercise them, you’ll lose them. So I decided at that point and time I was going to exercise my right to carry one.”

Grits N Gravy caters to the early-morning set in Elberta, and is a popular gathering point for many in the town to sit and talk over coffee. Baldwin County Sheriff Huey Mack says that Stewart is one of several local business owners that carry while on the job. Last year, a liquor store owner in Irvington, about 35 miles away, shot a rifle-welding robber who was holding him at gunpoint.

Alabama has some of the most pro-gun laws in the country. With open carry legal statewide since last year, the “Heart of Dixie” also enjoys a shall-issue concealed carry permit system administered by local county sheriffs. While each sheriff sets their own prices, they generally only charge a token fee. The state is one of just 32 that both allows private ownership of NFA items, but also allows the use of some of them by licensed sportsmen in hunting.

It’s this sort of liberal view towards gun rights that has made the state home to Anschutz, Steyr, and more recently, a large expansion from Remington Outdoor in Huntsville.

While many high-risk businesses such as gun shops, jewelry stores, and gas stations have long seen their staff carry firearms — and for good reason, restaurants have been rapidly catching up. Recently, the servers at Shooters, a Colorado burger joint, began open carrying as a rule, joining the baristas at Jitterz Java in Spokane, Washington, who turned to their Second Amendment rights after being robbed four times.

When asked by the occasional customer of Grits N Gravy why he carries a handgun, Stewart replies, “Because a police officer is too heavy.”