The Federal Bureau of Investigation is requesting the public’s help in identifying a man who allegedly shot and wounded a police officer during one of about a half dozen take-over style robberies committed across the U.S., the agency announced Tuesday.

“He has shown he is not afraid to shoot someone, and experience tells us he is not going to stop robbing banks until we catch him,” said Special Agent Kevin Boles, who is working the case out of the Los Angeles Field Office.

“We feel like we are racing the clock on this guy,” Boles said. “If we don’t get him soon, things could end badly and someone else might get hurt.”

The FBI and other entities, including the city of Chino, California, the East Idaho Credit Union, City of Rexburg, Idaho, and the California Bank & Trust in Chino are offering a collective reward of $100,000 for information leading  to the arrest of the man officials dubbed the “AK-47 Bandit.”

The suspect, who brandished the rifle with attached drum magazine, was believed to have committed robberies on Feb. 29, 2012, in Chino at the California Bank & Trust; March 12, 2012, in Vacaville, California, at a Bank of the West; July 6, 2012, in North Bend, Washington, at a Chase Bank; Nov. 7, 2012, in Rexburg, Idaho, at an East Idaho Credit Union; and Aug. 22 in Nebraska City, Nebraska, at a First Nebraska Bank. The bank robber is also suspected of an attempted robbery on March 9, 2012, in Sacramento, California, at a Tri-Cities Bank.

Authorities believe the AK-47 Bandit is a white male, approximately 25 to 40 years old, about 6-feet tall, has light-colored eyes and a stocky build. During the bank robberies he wore a dark ski mask, body armor and black gloves. The suspect used a dark grey, four-door 2009-2011 Nissan Maxima with   chrome accents as a getaway car for several of the robberies.

Just before the first bank robbery, police believe the suspect called 911 to report a false bomb threat. The call was used as a diversion and was made from a pay phone located near the bank officials said.

“This guy attempted to murder a police officer,” Boles said. “There is no telling what he is capable of. We need to get him off the streets for everyone’s safety.”

The FBI asks that anyone with information about the suspect or the robberies call 1-800-CALL-FBI or email bandit@chinopd.org.

Dispatch: 911 emergency. What are you reporting?

Caller: Is this the Chino Police Department?

Caller: Is this the Chino Police Department?

Dispatch: Yes it is.

Caller: Okay, I have a bomb over at (undisclosed location) and there is one at the 12th Street (inaudible—possibly catty-corner). This is not a drill. Do you hear me? There’s a bomb and I will explode it.

Dispatch: And where is it at? 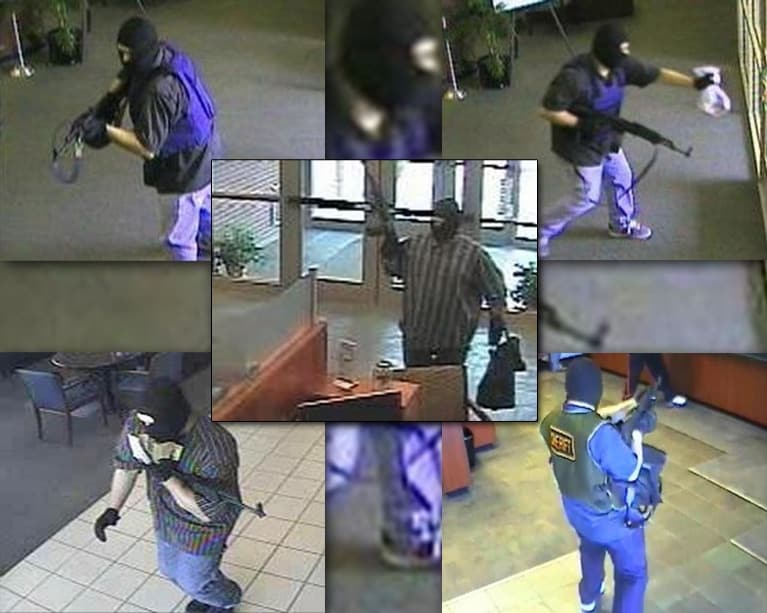 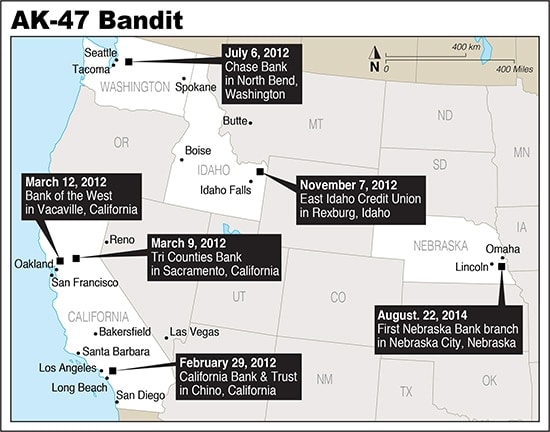 This map shows the locations of the AK Bandit bank robberies and attempted robbery. (Source: FBI)