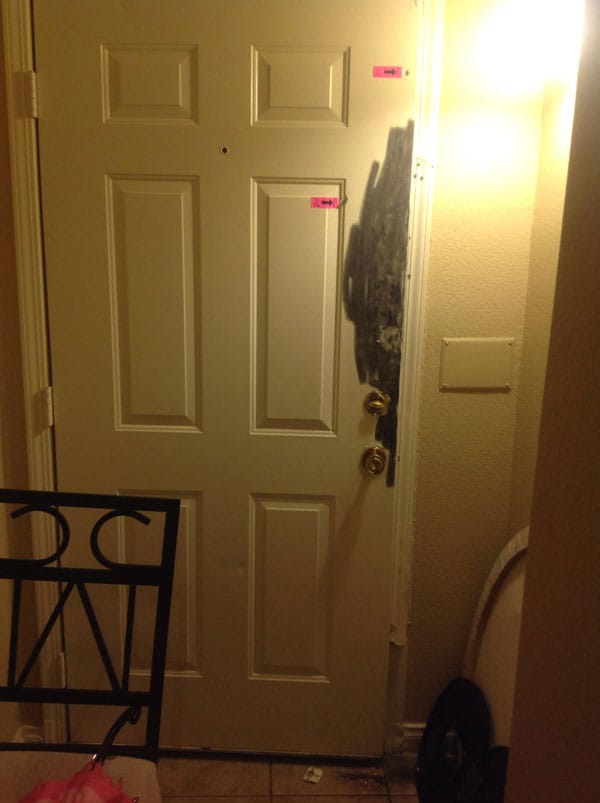 The inside of the victim’s door after it was kicked in by Jackson. (Photo: Imgur)

A woman shot a stalker after coming face to face with him when he kicked in the door of her Las Vegas apartment early Friday morning.

Douglas Eugene Jackson, 22, showed up uninvited to the apartment around 1 a.m., after more than six months of allegedly harassing the victim and sending her threatening messages.

The victim, who did not wish to be identified, told a local Fox affiliate that she had been sleeping with a chair against the door, but it didn’t keep Jackson out. Once Jackson gained entry into her home, she fired two shots, striking him once in the chest.

Jackson ran from the apartment and attempted to hide in some nearby bushes, but was located with the help of a K-9 unit. He was then transported to a local hospital where his condition is currently unknown. Once released, Jackson will face charges for home invasion and aggravated stalking.

An anonymous Imgur account believed by multiple media outlets to be the victim’s, detailed some of the harassment leading up to the shooting incident, which included an email where Jackson allegedly told the victim that she would “wake up to gunshots” and threatened to rape her “in the ass using your boyfriend’s blood as lube.”

The stalking eventually led the victim to not only relocate, change her phone number and attempt to diminish her online presence, but also obtain a restraining order, as well as purchase a handgun and get a concealed carry license. However, the victim said Jackson made it quite clear to her that the restraining order was “just a piece of paper.”

And while that piece of paper wasn’t able to protect her, her firearm did and neighbor Kathleen Desimone said she did the right thing.

“You have to protect yourself,” said Desimone. “I hope that everything works out and he stays away from her.”