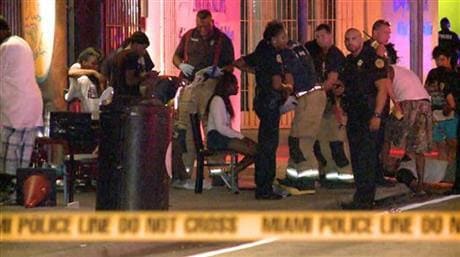 The youngest of the 15 gunshot victims present in the nightclub was an 11-year-old girl. (Photo: AP)

The manager of The Spot, the Miami nightclub where 15 people were shot over the weekend, was arrested Tuesday for selling liquor without a license.

The Associated Press reported that the establishment is only licensed by the Department of Business and Professional Regulation to sell food, wine and beer, but authorities discovered three bottles of liquor behind the bar.

The Spot, which is well-known for its fried conch, chicken wings and island music, should not have been operating as a nightclub according to authorities.

But neighbors said the club had recently started hosting teen nights, attracting large crowds who would often migrate between the club and the convenience store across the street.

When gunfire erupted about 1 o’clock a.m. Sunday, dozens of teens were seen pouring from the club’s doors and running down the street. Fire Rescue officials found minor violations during the investigation and the Fire Marshal is working to determine whether the club was over capacity when the shooting occurred.

Investigators have few details to work with and currently no suspects.