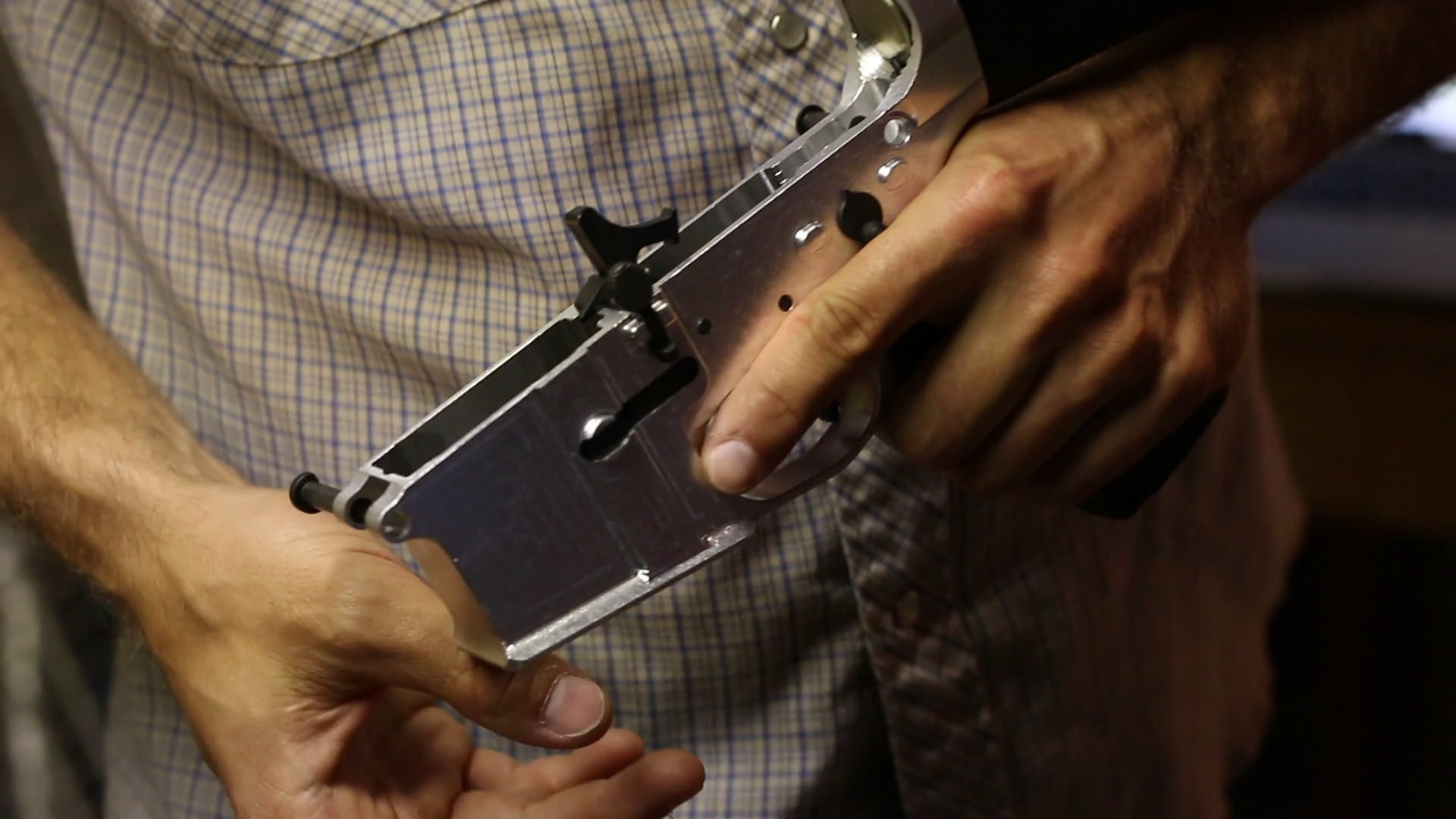 The Ghost Gunner, a plug and play desktop CNC machine can finish an 80 percent AR-15 lower in about an hour. (Photo: Defense Distributed)

Wilson’s company, Defense Distributed, unveiled its introductory-priced $999 Ghost Gunner machine this month and, unlike the company’s previous entries into the DIY firearm world, the company is promising the ability to produce guns that are more durable. The device, essentially a simplified desktop CNC machine, will allow a user with no prior manufacturing skillset, to produce a working AR-15 lower receiver from almost any mil-spec 80 percent receiver blank.

“Ghost Gunner automatically finds and aligns your 80 percent lower receiver to the machine, with simple installation instructions, point and click software and all required tools,” reads Defense Distributed’s product page for the machine. “Just follow a few simple instructions to mount your 80 percent lower receiver, tighten a couple screws (with simple tools we provide), and on day one, Ghost Gunner can help you legally manufacture unserialized firearms in the comfort of your own home.”

The PC-connected milling machine weighs about 45-pounds and is roughly the size of a personal inkjet printer. There is no assembly required and it billed as ready to go right out of the box. The manufacturing process is largely automated and self-contained with even the aluminum chips retained inside the machine. The plug-and-play software will be open-sourced and in the public domain. The company stresses that, although initially just Windows compatible, they are planning a Mac version. 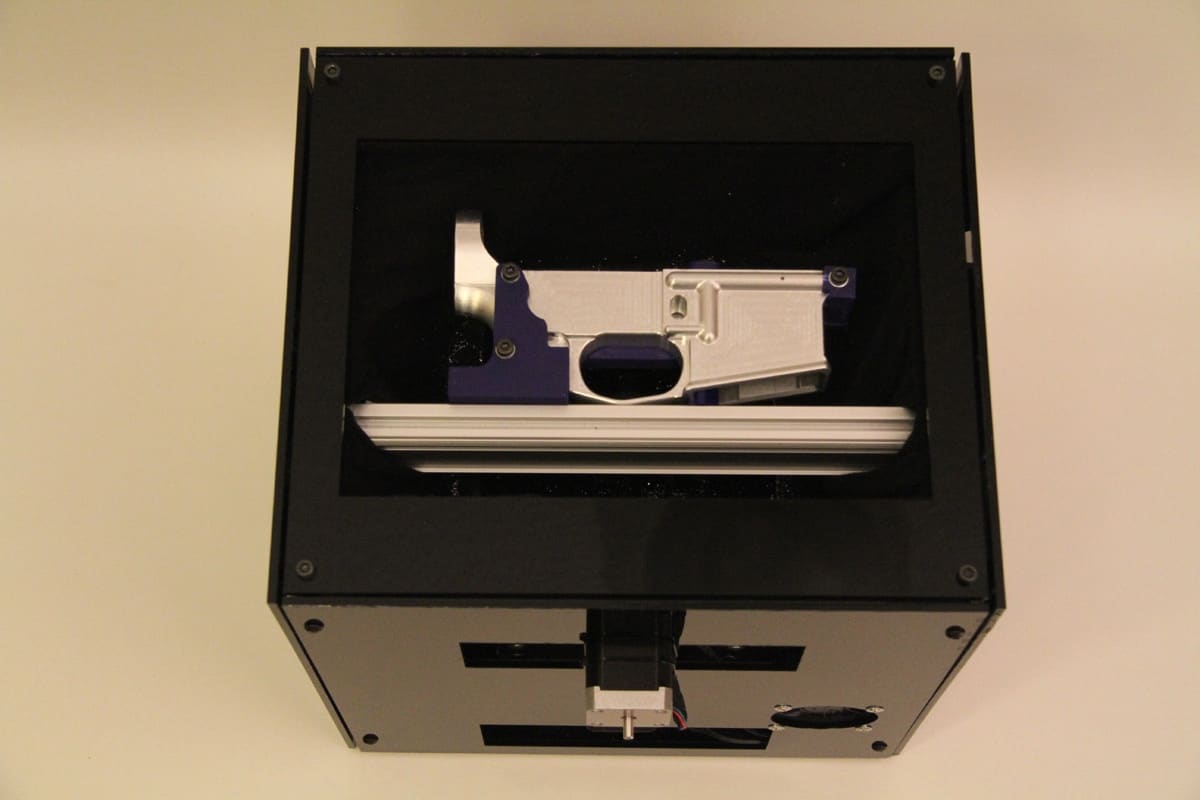 The Ghost Gunner can will fit on a desktop and is about the size of a personal printer. (Photo: Defense Distributed)

With it, Defense Distributed states that a standard mil-spec 80 percent AR lower, that already has the rear take down well milled out, can be finished in about an hour.

While many companies advertise 80 percent lowers as “unregistered” and “unserialized” there is nothing illegal about these non-guns. Alone, these hunks of partially shaped raw billets are not considered a firearm. It is only after a home-builder completes the lower through a complicated series of machining techniques and adds internal parts, an upper and other components is it a firearm. According to the Bureau of Alcohol Tobacco Firearms and Explosives, as long as you can legally possess a modern firearm and do not make the gun a Title II weapon like a machinegun or short-barreled rifle, it is legal to make one at home.

Just Tuesday, a controversial bill in California, to further regulate these homebuilt guns was vetoed by Gov. Jerry Brown. The legislation was known popularly as the “Ghost Gun” bill after an embarrassing press conference by its author, state Sen. Kevin de Leon. It is an homage to this bill and that conference that Wilson named his new CNC machine.

“It just seemed to be such an affront and also a challenge,” Wilson, who is trademarking the term “ghost gun” to limit how gun control advocates can use it, told CNET. “We used his creation and his words to trademark the project. … The ball is in his court.”

Wilson, who made headlines last year when he created the first 3D-printed handgun, the single-shot Liberator, later the subject of a State Department crackdown, is a self-proclaimed anarchist. He has long pushed to decentralize the manufacture of once traditionally-produced, government-regulated goods, including firearms and has moved recently into “dark web” technology such as a Bitcoin anonymizer project.

Overall, he sees this latest project as a well-played counter stroke to those who would regulate homemade firearms.

“This wouldn’t be worth doing if Kevin de Leon didn’t know about it,” Wilson told Wired. “What excites me is giving this world to the politicians. Our strategy is to literalize and reify their nightmare, to give them the world they’re talking about.”