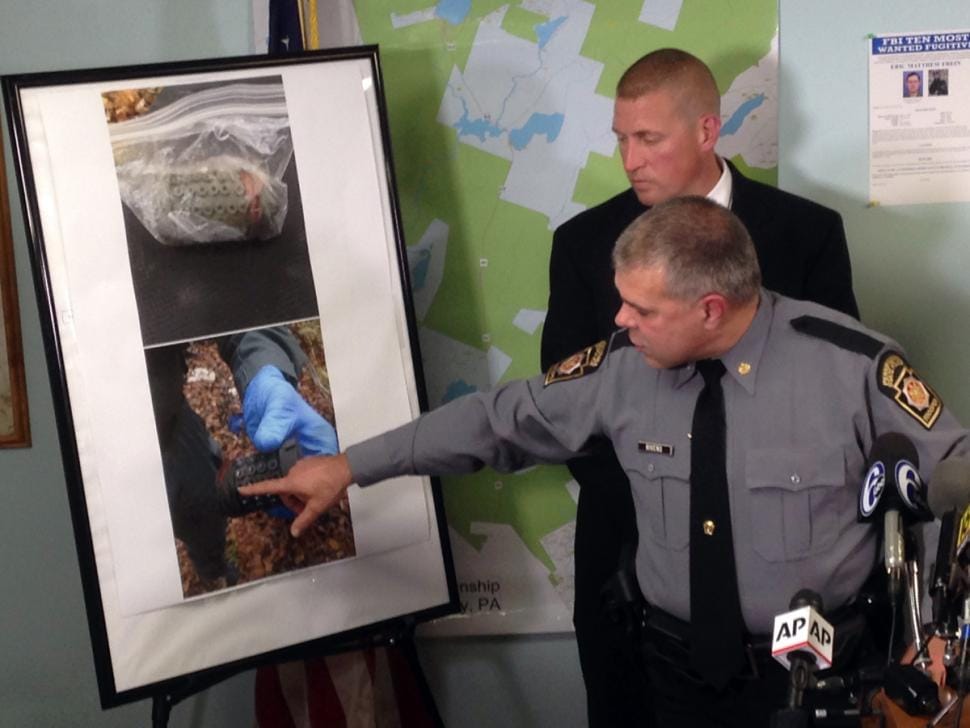 After finding improvised explosives and having two officers airlifted out after injuries, Pennsylvania State police have banned hunters from the area Eric Frein is believed to be hiding.

Frein, who allegedly killed one Pennsylvania state trooper, injured another and triggered a statewide manhunt last month, has been on the run as a growing army of federal, state and local authorities comb 250 square miles of dense forest in the Pocono Mountains for the past 19 days. Across large swaths of Monroe and Pike counties, rural areas known for their high concentration of hunters, sportsmen are barred from the woods while the search intensifies, with pipe bombs and injuries leading to new developments.

Late Wednesday night two state troopers were airlifted out of the area after they fell from a tree stand. This comes following the discovery of what authorities term “substantial explosive devices.”

“We found them along with a number of other supplies, clearly ready to be deployed,” Lt. Col. George Bivens of the Pennsylvania state police explained.

This find led to the Pennsylvania Game Commission issuing a ban on hunting and trapping in seven townships in the northeastern portion of the state Wednesday, in the interest of safety.

“While we realize this temporary closure might disappoint some of the hunters and trappers it affects, we’re certain, too, they understand the gravity of the situation, as well as the danger in allowing the seasons to continue as scheduled, given this new information,” Game Commission Executive Director R. Matthew Hough said in a statement. “Plenty of good hunting and trapping opportunities remain outside of the temporarily closed area, and we need hunters to readily adjust their plans to help bring resolution to this case and see that justice is served.”

Frein, a self-styled survivalist who is believed to be armed and wearing diapers, is currently on the FBI’s Ten Most Wanted fugitives list with a $100,000 reward being offered for information leading to his arrest.