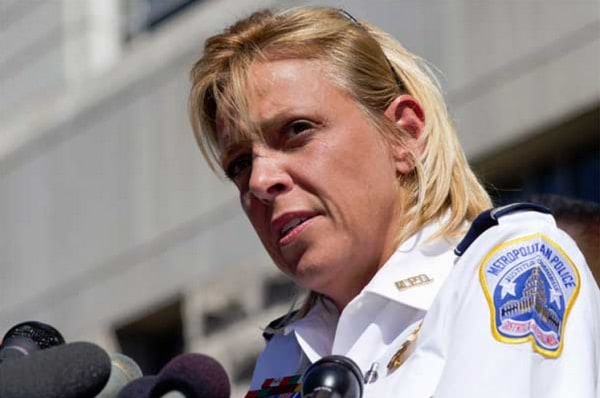 Washington D.C. Metropolitan Police Chief Cathy Lanier may soon been empowered to decide who has “good reason” to have a concealed carry permit in the Nation’s Capital. (Photo: Washington Times)

The plaintiffs in the federal lawsuit that brought about Washington D.C.’s new concealed carry law asked the judge in the case to block its implementation due to its structure.

This comes in the case of Palmer v D.C., a suit that challenged the city’s defacto ban on handgun carry outside the home. In July, U.S. District Court Judge Frederick J. Scullin struck down the district’s law then later gave the city a 90-day window to either appeal or adopt, “a licensing mechanism consistent with constitutional standards enabling people to exercise their Second Amendment right to bear arms.”

On Sept. 23, the D.C. City Council approved by unanimous vote a strict “may-issue” licensing scheme in which applicants would be forced to prove they had sufficient “good reason” to request a concealed carry permit. If such a permit was granted, the ordinance provides a labyrinthine collection of restrictions on just where and when such a permit would be valid. This led the legal team for the plaintiffs in the case to file a 31-page request for an injunction Thursday against the law.

“Defendants’ unyielding hostility to the right to bear arms, and their commitment to appealing their loss here, only serve to underscore their intent to obstruct and frustrate the carrying of defensive handguns to the greatest possible extent,” wrote noted Second Amendment scholar Alan Gura in the motion for Palmer and the other plaintiffs in the case. “It is not difficult to view the illusory licensing regime in that light.”

The motion argues that the city council did not produce legislation that would meet constitutional standards enabling those who so desired a chance to exercise their right to bear arms. Instead, the plaintiffs see the city’s response as, “a thumbing of the municipal nose at the [court].”

The plaintiffs cite that the city simply dusted off old language from prior laws that were struck down, and cobbled them together to form a law that would offer a permitting scheme in name only. Besides the restrictive and arbitrary “good reason” need that each applicant for a permit would have to prove to the Metropolitan Police Chief Cathy Lanier, the motion points out that any appeals on those denied would have to go before a board in which at least three out of five members were appointed by the city.

“It is almost impossible to imagine such a board ever overturning the Police Chief’s decisions barring the carrying of handguns, even if the licensing standards were objective and themselves constitutional—and they are not,” reads the motion.

The motion even goes so far as to point out that none of the plaintiffs — whose pursuit of a means to carry a legal handgun outside their home in the District was the root of the lawsuit — could meet the standard asked of the city’s proposed new law to secure one of the new permits after the suit’s recent favorable ruling.

For these reasons and others, Gura wrote that, “Defendants’ licensing regime simply cannot be squared with the Court’s opinion and order, which anticipate ordinary people being able to access a right rooted in self-defense.”

According to reports from the Washington Post, D.C.’s Attorney General, Irvin B. Nathan advised that, “The District will respond fully in court to this motion, which has no merit under governing federal law.”