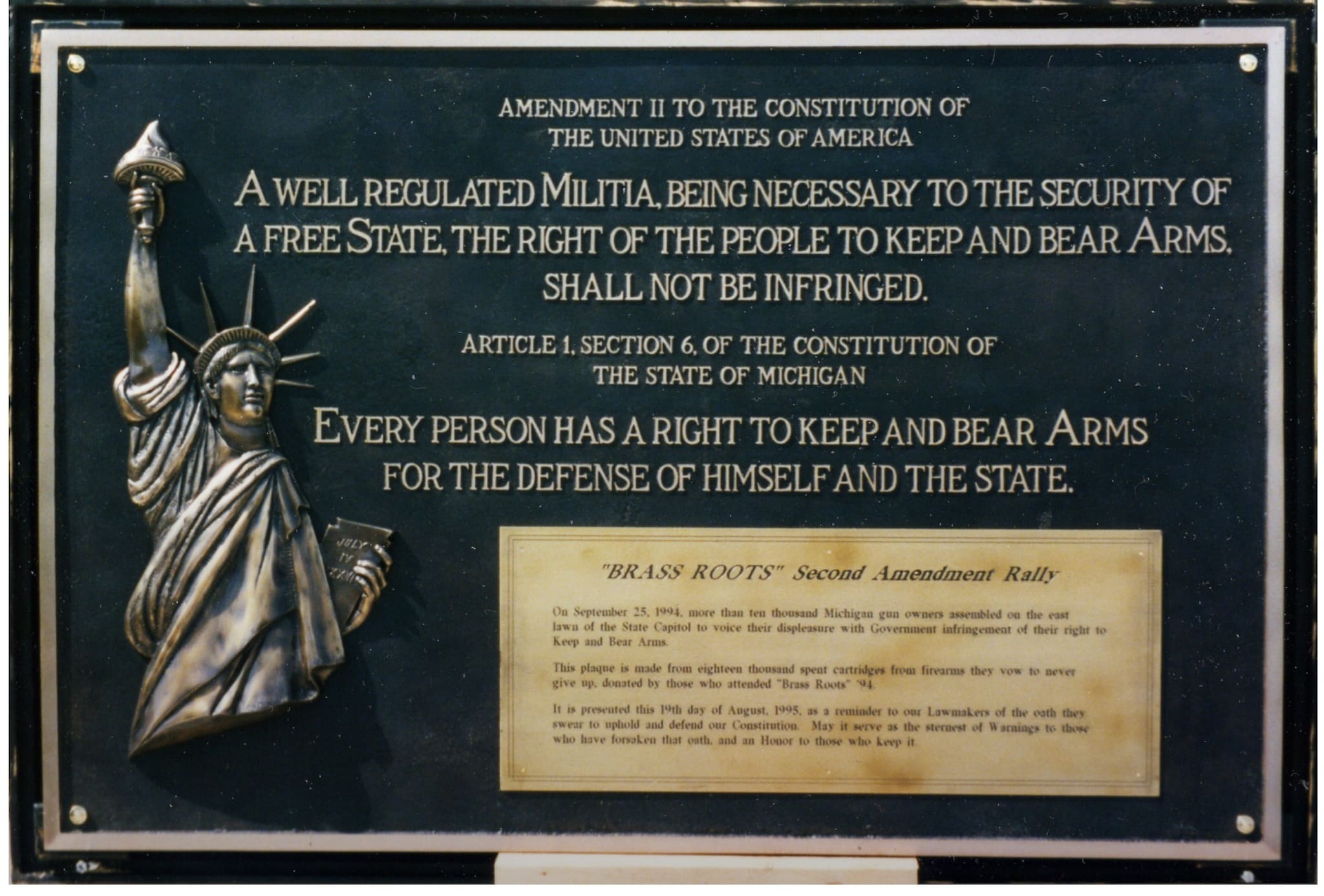 The 4×6 foot, 400-pound monument to the right to bear arms known as the Brass Roots Plaque, could soon be placed at the Michigan Capitol. (Photo: Brassroots Plaque.com)

A 400-pound monument made from scrapped ammunition casings, which traces its origins back to 1994, is a step closer to finding a permanent home on Michigan’s state Capitol grounds.

The byproduct of a campaign rally by a candidate for the U.S. Senate nearly two decades ago, the monument was crafted from empty brass donated by thousands of gun owners. The six-foot-wide plaque is engraved with the Second Amendment of the U.S. Constitution as well as Article I, Sec. 6 of the Michigan Constitution, both of which detail the right to keep and bear arms. Now legislation has been re-introduced to the state House to take the “Brass Roots” marker out of private storage and put it on display at the Capitol.

“To be able to display a piece of history for free I think is a very good deal for Michigan taxpayers,” Rep. Martin Howrylak (R), sponsor of the measure, told MLive.com.

Howrylak’s bill, HB5595, introduced in May, has 15 co-sponsors and was brought up at the House Committee on Transportation and Infrastructure this week. The simple two-page act would direct the Michigan capitol park commission to display the monument as soon as funds could be made available. According to a fiscal analysis submitted last week, the only expenditure to tax payers for the donated monument would be a one-time emplacement cost.

The plaque came about after a series of rallies in 1994 held to support Jon Coon, at the time a Libertarian candidate for the U.S. Senate. Among the senate hopeful’s outspoken supporters at the time was musician and political activist Ted Nugent who spoke at the Brass Roots rally event. Although Coon only garnered 4.2 percent of the popular vote in Michigan that year, with Republican Spencer Abraham taking the seat, the Brass Roots plaque has endured.

Currently in storage, the sign almost became state property in 2005 when a bill similar to the one currently in the legislature passed the House in a 108-0 vote but died in the Senate.

Coon, not currently running in this year’s election cycle, is urging the state to accept the monument and put it on display.