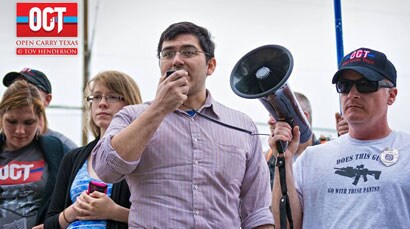 After months of fighting to have his case dismissed, a young man from San Antonio has finally been granted his wish. Henry Vichique received word this week that his case was dismissed following the recommendation of city prosecutor Elizabeth Yetman.

Vichique was facing charges for carrying a loaded rifle within city limits, but part of the problem with the case was the fact that the city ordinance directly conflicts with the state law.

Earlier this year, Vichique was walking home with a rifle slung across his back – as he often did and as is legal in the state of Texas – when he was approached by officers who responded a call to 911 claiming he was aiming the firearm at others.

The officers demanded Vichique drop his weapon and when he did not immediately comply, as the gun was secured in a sling across his back, he was tased without warning. Vichique claimed he did nothing wrong and his rights were violated.

“I kept (the rifle) on me. I did not want to make any attempt to look like I may be aggressive because they could have shot me on site,” Vichique said. “I just told them I was within my rights. I didn’t argue with them.”

The treatment of Vichique set off protests from Open Carry Texas, a gun rights group founded by CJ Grisham, who received similar treatment by authorities last year for carrying a rifle while on a Boy Scout hike with his son in a rural area.

And Vichique, a young father of two, is no less than ecstatic about the court’s decision.

“A little studying in case law concerning your rights will muster up the greatest revering defenses from way back since 1776,” Vichique told Guns.com. “You never known, so challenge them.”