Eagle Imports, best known for its catalog of American Classic, Bersa and Commanche firearms, is adding a new name to its portfolio: Grand Power. Eagle will be importing the full line of Grand Power pistols starting with the most popular models.

Grand Power has a dedicated following in the U.S. with recreational and competition shooters and is well-known in Europe, particularly with the International Practical Shooting Confederation and other competitive groups.

Once partnered with STI International, Grand Power was poised to hit the American market a few years ago but didn’t get wide enough distribution to make a mark. Now with a solid distributor, Grand Power hopes to change all that.

Grand Power pistols are modern polymer-framed double-action pistols for duty, self-defense and competition. The brainchild of designer Jaroslav Kuracina, these guns were built to withstand service with military users and be fully-capable of competitive shooting right out of the box.

“Grand Power is very pleased to partner with Eagle Imports in this exclusive distribution agreement,” said Kuracina, who is also the CEO of the company. “Eagle Imports is well known for their exceptional customer service to their brands, as well as the sales distribution channel, right down to the end users. We look forward to a long and positive relationship with Eagle Imports and firearms enthusiasts in the U.S.” 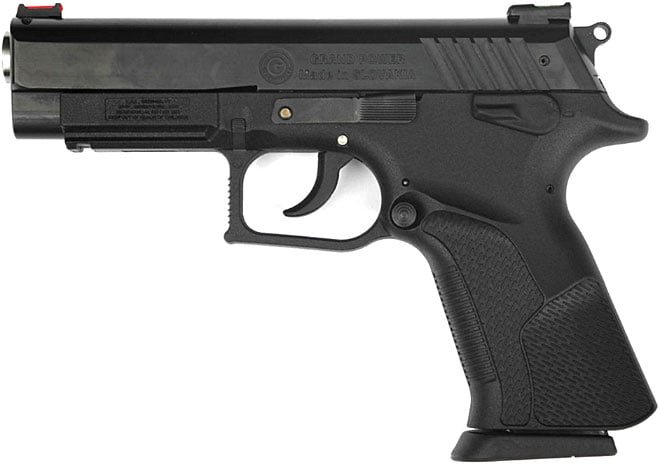 Originally chambered for 9mm, Grand Power now offers pistols chambered in 9mm, .40 S&W, .357 SIG, .45 ACP and 10mm, giving fans of the full-house cartridge another option in the 10mm game as well as other popular chamberings.

All Grand Power pistols are based on the full-size K100 design, which has been adapted into service size and sub-compact models for concealed-carry and duty use in Kuracinaa’s home, Slovakia and abroad.

Not that recoil is much of an issue with these guns. One thing that makes them stand out from the crowded ranks of service pistols is the uncommon recoil system the K100 and all other Grand Power pistols employ. Grand Power guns use a rotating locked breach, not a Browning-style tilting barrel. The barrel never tilts up, it stays in-line with the pistol, reducing muzzle flip and associated felt recoil.

In all other respects, the pistol sports a very modern design with fully-interchangeable grip inserts and true ambidextrous controls including the manual safety, slide catch and magazine release. People who have spent time behind a Grand Power pistol will confirm the light, relatively short double-action trigger and exceptional single-action trigger and extremely short, positive reset.

Grand Power pistols have standard capacities of 15+1 in 9mm with other capacities depending on the cartridge and frame size, with extended 20-round magazines in production for home defense and competitive shooting.

While final pricing and other details and specifications are still in the air, existing Grand Power pistols that have been brought to the U.S. retail for under $500 and while they’re competitive with guns that cost more, we expect pistols brought in by Eagle to sell for about the same.

The big difference with Eagle Imports is that we also expect to see these featured pistols get a lot better support, including accessible factory magazines and accessories like replacement sights and holsters.

For more info about existing Grand Power pistols visit the company website and for up-to-the-minute news check out the Grand Power Facebook page.