Settlement reached between soldier and defense contractor over injury 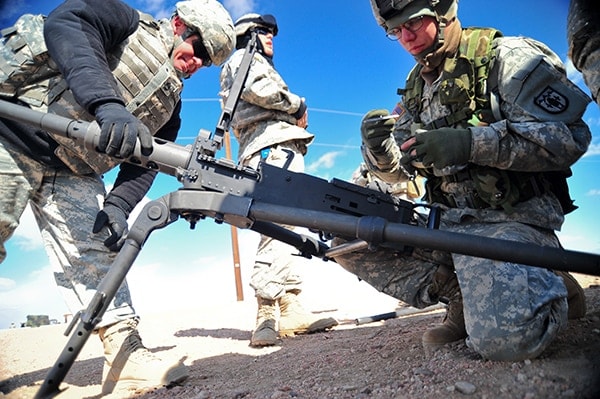 A U.S. Army soldier conducts a pre-mission inspection on the M2 .50-caliber machine gun for headspace and timing.

A federal judge in New Jersey agreed to a joint request Thursday to dismiss a 2012 lawsuit filed by a U.S. Army soldier against General Dynamics over an injury obtained from his M2 machine gun.

The case, that of former soldier Sean P. McMahon, was filed two years ago in the U.S. District Court of New Jersey under the state’s Product Liability Act. The soldier’s legal team held that the machine gun, test fired in Afghanistan for the first time, was defective, and caused lasting physical and neurophysical injuries to McMahon when it malfunctioned.

In the original court documents, McMahon contended that the M2 heavy machine gun, a staple of the U.S. military for almost a century, has been modified from its original fixed headspace design to one with an adjustable headspace that requires operator intervention to correct. When McMahon fired a new gun, manufactured by General Dynamics under government contract specifications, on July 4, 2010 at Forward Operating Base Kunduz, Afghanistan, it suffered a detonation that sent fragments from a .50 caliber shell casing into his leg. This, in turn, led to deep vein thrombosis, hearing loss, and “adjustment disorder with mixed disturbance emotions and conduct,” forcing McMahon’s medical retirement from the Army.

The weapon, which McMahon was proficient with, suffered the malfunction when firing in the single-shot mode after failure to fire when on full auto.

While General Dynamics sought to dismiss the case outright, citing that it followed long-standing military specifications that dated back to 1944, the judge in the case took the position that the suit was valid, since the weapon was made stateside just months before it suffered the malfunction and was possibly defective. The plaintiffs also disputed three different Army investigative reports into the incident, entered as exhibits by the defense contractor.

“Here, a U.S. serviceman asserts that a manufacturing defect at the defendant’s U.S. plant resulted in the production of a defective gun that injured him,” wrote U.S. District Judge Kevin McNulty in 2013 when he dismissed the case in part, and allowed it to proceed in part. “Such a claim does not implicate government design specifications, battlefield operations, political questions, or secret technology. Such a claim is the ordinary stuff of civil, and civilian, tort law.”

In that 2013 decision, McNulty, a recent appointment to the court by President Obama, took issue with the fact that McMahon’s legal team did not address exactly how the weapon in question was defective, only that “the M2 was not manufactured properly.”