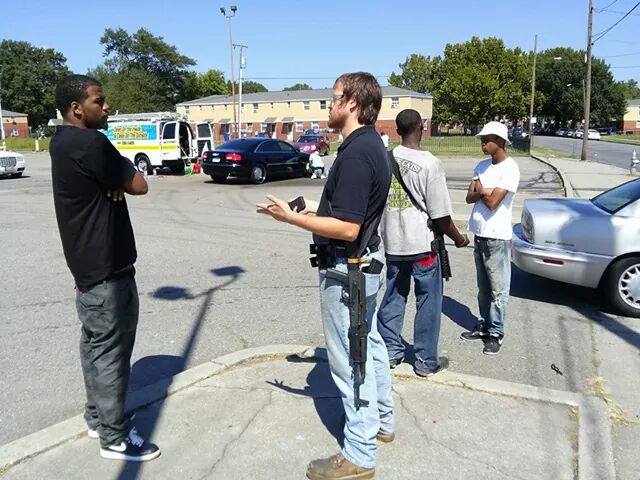 The Virginia-based Right to Bear Arms Richmond organization carried out an open-carry event through parts of the state’s capital city Saturday, which included public housing areas.

The group walked around the perimeter of the Creighton Court area of the city, carrying unloaded rifles among other firearms. Right to Bear Arms Richmond, as well as the larger Virginia Citizens Defense League have been conducting these events, termed “Freedom Walks” throughout the summer, but this is the first time that the Church Hill area, surrounding public housing at Creighton Court, was covered by the group. The mission, according to organizers, was education and the event went off with good results.

“Yesterday’s freedom walk in Churchhill (sic) Richmond Virginia. Went off without a hitch,” read a statement posted on the group’s social media page. “Nothing bad happened we had loads of positive interactions. We got lots of exercise. We had no police encounters. We did not see a federal agents.”

While the group had earlier planned to walk through the public housing complex, it changed to conducting its moving event along the perimeter of Creighton Court. The reasons stated for this included the belief that the complex was private property. However, many residents of the area had publicly opposed the walk.

“Why would you come out here where we are to promote that we should have a gun?” Creighton Court Tenant Council President Marilyn Olds told CBS 6. “We hear gunshots seven days a week — day or night. We don’t need anybody coming through this property walking through with guns.”

The Virginia incident mirrors a similar case in Texas earlier this summer. Open Carry Texas planned a march in Houston’s Fifth Ward, a predominantly black area of the city, but when leaders from the area and the group met, things quickly got heated.

Protestors of the controversial group —some of them armed — shouted, “You are not welcome here today or Saturday.” And the Fifth Ward’s leaders questioned the open carry group’s motives and also accused them of being racist.

This led to quick backpedaling by Open Carry Texas, whose board “voted unanimously to postpone the event for a future date in order to give OCT and 5th Ward leadership an opportunity to overcome the controversy associated with this event.”

According to Right to Bear Arms Richmond, the group is looking forward to its next freedom walk, tentatively set to take place in the city of Hopewell.