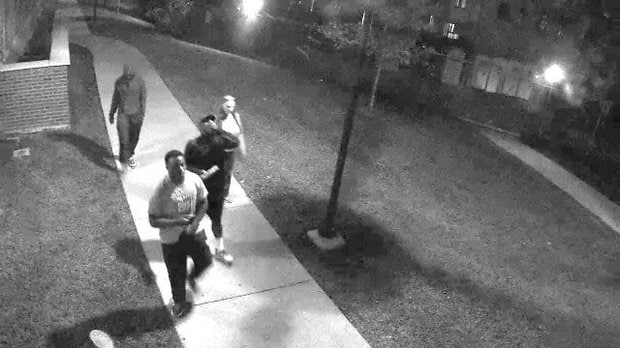 A group of four University of Kentucky football players, shown in this surveillance still, are in trouble after allegedly firing airsoft guns around campus (Photo: Kentucky.com)

This year’s freshman crop of athletes has so far seen players at two Southeastern universities in trouble over alleged antics with BB and airsoft guns.

On Wednesday, news broke of three players at East Carolina University who were suspended indefinitely from all team activities after school officials found out the trio of freshmen were cited by local police for discharging a weapon within city limits. This follows on the heels of an incident last month where four University of Kentucky players received one-game suspensions after allegedly firing airsoft guns on campus.

“One of the benchmarks of our program is that our players will be held accountable for their actions on and off the field, in the classroom and in the community,” ECU head coach Ruffin McNeill told local media about the latest group of players in trouble. “It is with this commitment in mind that I have suspended these individuals indefinitely for their actions that were irresponsible and dangerous. They have acknowledged their mistake and now part of our job is to help them learn from this situation.”

In the more recent incident, the three freshman players, linebacker Yiannis Bowden, receiver Curtis Burston, and linebacker Markel Winters, who have so far not seen any field time in their post graduate career, were arrested by Greenville Police. Authorities responded to a call of three armed males firing guns from a vehicle. Upon investigation, the police discovered the players had been firing BB guns and they were cited on misdemeanor charges. The incident occurred near a local elementary school at about 1:30 p.m. Tuesday, causing the school to go into lockdown.

The UK players, wide receiver Dorian Baker, quarterback Drew Barker, defensive end Tymere Dubose and special teams player Stanley “Boom” Williams, found themselves the subject of a campus wide lockdown after they allegedly roamed the school grounds late in the night of Sept. 28 with three airsoft guns. Surveillance cameras set up around the school as part of a $5 million increase in campus security captured images of what is believed to be the players, all freshmen, discarding the guns after allegedly firing them around campus.

Besides a one-game suspension, authorities have forwarded the case file for further investigation.

“We absolutely respect being part of a wonderful campus community,” UK Athletics Director Mitch Barnhart said. “It disappoints us when one of our student-athletes does not live up to our expectations. We respect the process of the University and are working hand-in-hand with the campus community on this issue.”