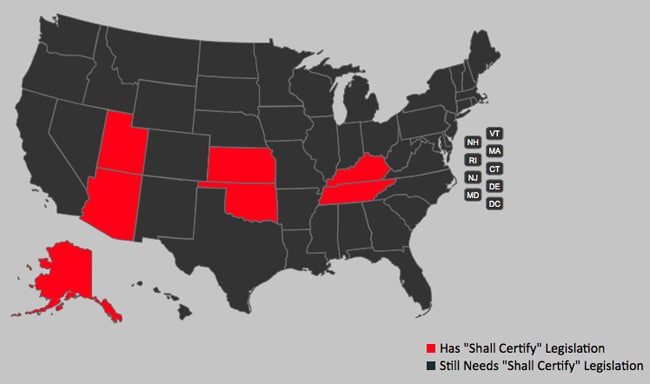 A keystone of the new NFA Freedom Alliance is to push for more “shall certify” laws, currently only in seven states. (Image: NFAFA)

Among the ranks of Second Amendment advocacy organizations now stands the NFA Freedom Alliance, formed with the stated goal to expand the right to own, sell, and use National Firearms Act-regulated items.

The group, introduced this week, is helmed by Arizona lobbyist and long-time National Rifle Association board member Todd Rathner. Among other initiatives, the NFAFA plans to work on passage of “shall certify” measures, now law in just seven states, nationwide. The legislation mandates that local the Chief Law Enforcement Officer in NFA parlance sign off on certifications for those applying for Title II firearms such as suppressors, machine guns, and short-barreled rifles and shotguns. From there the group wants to work with the U.S. Congress to eventually eliminate CLEO certification altogether.

In addition to the push for shall certify, the group has nearly a dozen stated goals ranging from streamlining and expediting the process to obtain a regulated device or firearm to pushing legislative reform at the state levels.

In recent years, increased interest in NFA items has exploded in popularity. According to statistics by the Bureau of Alcohol, Tobacco, Firearms and Explosives, in the seven-year period between 2005 and 2012, the number of regulated firearms processed per year ballooned from 147,000 to nearly 1.2 million. Similarly more than 3,000 manufacturers are currently in operation with the Special Occupational Tax license to produce these firearms. This is largely fed by trends towards increased mainstream acceptance of suppressors and similar devices.