Victim of violent home invasion: 'Part of me wishes I killed them' 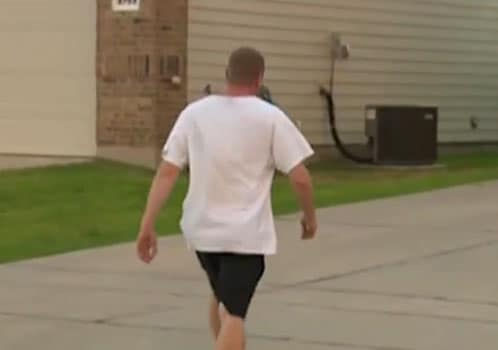 The victim was obviously distraught and did not want to show his face on camera. (Photo: KHOU)

The victim of a violent home invasion last week in Katy, Texas, shot two of the three suspects who broke into his home, but now he is emotionally torn over the way things would played out.

The victim, who does not wish to be identified, told reporters he was working on his computer the afternoon of Oct. 2 when three armed men wearing masks burst through his door. Two of the suspects entered his bedroom where he was, while the third was elsewhere in the home.

The home is shared by five friends, but the victim and his roommate’s son were the only ones home at the time of the break-in.

The suspects bound the man’s ankles and wrists with duct tape, and tied up the boy as well.

“They flipped me on my stomach and put me in a head lock, tried to choke me out,” the victim told KHOU. “I faked fainting and played dead,” he said, adding that he kept thinking about his five-year-old daughter.

“I looked up 15 minutes into it, and the guy said, if you look up again, we’ll kill you,” he said. “About five minutes later, I heard the door to my room shut and I didn’t hear any noise.”

The suspects had tried to get into the victim’s gun safe, but were unsuccessful. However, once he heard the door shut, he was able to get to his gun.

Then he waited while the suspects ransacked the house.

“The door opened and I unloaded on them,” he said.

The victim fired until his gun was empty. Two of the suspects were shot and the third fled the scene.

“The first unit did arrive and was able to engage one of the suspects and take him into custody, while another did flee and was later found a block and a half away,” Sgt. Rico Castillo with the Harris County Sheriff’s Office told ABC 13.

The two suspects were transported to an area hospital where they both underwent surgery and are expected to survive, but the third suspect is still at large.

The occupants of the home are unsure why the violent home invasion occurred, but authorities believe the attack was random.

As for the victim, he has mixed emotions about the frightening ordeal.