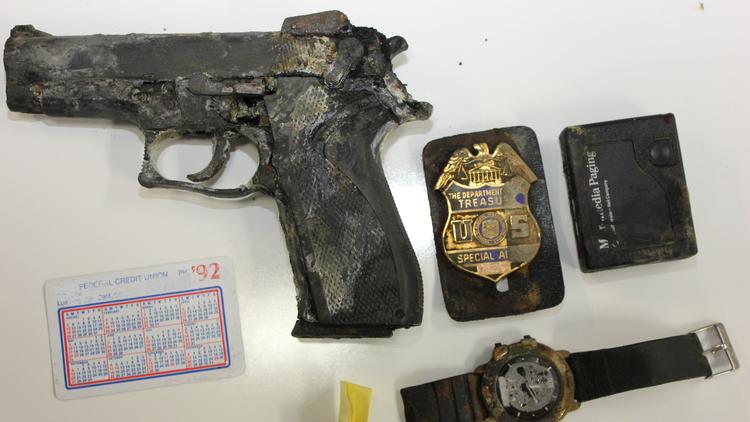 A handgun, badge, and other items lost by an ATF agent in 1992 were found in Castaic Lake this week by a fisherman. (Photo: L.A. County Sheriff’s Department)

A fisherman in California’s drought-stricken Castaic Lake got more than a nibble when he found a backpack Thursday that was lost by a federal agent decades ago.

The lake, in the Sierra Pelona Mountains of northwestern Los Angeles County, is experiencing near-record low levels, having dropped more than 150 feet in recent months. This has both limited access to parts of the 6.6-square-mile reservoir and exposed portions of the lake that have long been underwater. This led to a local angler discovering a muddy bag containing a corroded Smith and Wesson semi-automatic pistol, a tarnished gold U.S. Treasury agent’s badge, and a vintage beeper. The contents were traced back to a federal agent who lost the equipment while on a fishing trip in 1992.

“We knew it’d been there a while when we saw an old pager,” Los Angeles County Sheriff’s Deputy Johnny Jones told the LA Times.

The badge, marked U.S. Treasury, also predates the agency’s 2003 move to the Department of Justice.

According to authorities, responding sheriff’s detectives were able to trace the items to an agent who is still active with the Bureau of Alcohol, Tobacco, Firearms and Explosives. The agent explained to them that he had lost the items, which ironically were in the backpack for safekeeping, when the boat he and another law enforcement officer were in became swamped.

The ATF agent explained he felt safer taking his credentials and issued firearm, recovered apparently with the safety still on, with him rather than leaving them in a soft-topped Jeep.

The agency tasked with regulating firearms production and sales among other responsibilities has a checkered past when it comes to missing firearms.

Besides the notorious Operation: Fast and Furious gun-walking scheme, an investigation by the Journal Sentinel discovered that the 4,600 agent strong ATF has lost no less than 49 guns in the last four years. The missing weapons included at least one agency-owned machine gun.

One agent discovered that his ATF-issued Glock was missing – and never found – after he had enjoyed a night of drinking with fellow agents and friends at a Los Angeles bar.

Two 6-year-old boys found another agent’s missing Smith & Wesson .357 sitting atop a storm drain. The agent’s gun had been missing for several days, although he didn’t even bother to report it until the story made headlines in the local newspaper. However, in the report the agent admitted that had the story not broke headlines he would have never informed his supervisor of the lost firearm.

All of these incidents came after a 2008 audit from the Department of Justice blasted ATF for losing 76 guns over a 59-month period from 2002-2007. The audit noted that the rate was three times higher per agent when compared to losses experienced by the FBI and DEA.

Meanwhile, the agent whose gun was recently recovered admitted to sheriff’s officials that he “got a lot of grief” from peers at the time about losing the items in the lake.