D.C. lawmaker says police should not have guns 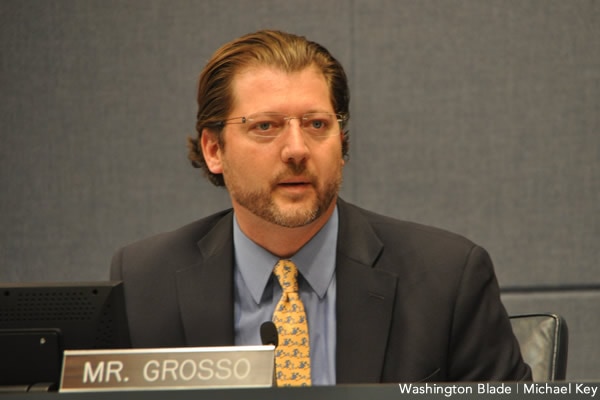 D.C. Councilman David Grosso (I) would like it if fewer guns were in the city, police included. (Photo: Michael Key/Washington Blade)

Since making news recently for passing the strictest concealed carry handgun law in the country, a Washington D.C. city council member is drawing flak after contending that District police shouldn’t have guns either.

On Wednesday, D.C. Councilman David Grosso, an Independent, told a public oversight hearing on the controversial practice known as “stop and frisk” held at the Howard School of Business about his feelings on firearms in the nation’s capital.

“My staff won’t let me tell you that I think we oughta get rid of guns in the city and that police shouldn’t have guns so I’m not gonna tell you that,” Grosso said to some applause from the audience.

The councilman at large, who took office last year, later clarified those remarks Thursday in an interview with the Washington Post.

While Grosso says he has no plans to introduce legislation to disarm the entire 4,000-officer Washington Metro Police Department, he would like to see fewer numbers of armed law enforcement on the city’s streets. He directly mentioned that many police forces overseas do not have armed officers, a sentiment that was echoed by fellow D.C. Councilman Tommy Wells at Wednesday’s hearing.

“When you have a gun, it changes the dynamic completely. If we had a police force that could be trained to de-escalate situations without a gun like in other countries, I think we’d be in a better place,” said Grosso. “Call me a radical, but I’m trying to change things in our city.”

Grosso further elaborated to the Blaze that he didn’t necessarily mean that all police should be disarmed, just that perhaps two or three out of twenty should have guns, saying the city, which suffered 84 homicides in 2013, “doesn’t have an overwhelming number of situations where the police need to have a gun in order to de-escalate the situation.”

Although MPD has not officially responded to Grosso’s comments this week, others have.

Delroy Burton, chair of the D.C. police union told media that Grosso is “living in a fantasy land.” Burton contends that among the first responders to the Washington Naval Yard shootings last year were Metro police who would have been useless if they were unarmed.

The shooter in that situation, Aaron Alexis, was fatally shot by MPD officer Dorian DeSantis, recently honored for his actions that day.

In addition to the police union’s comments and negative posts on his social media accounts, Grasso’s idea was also ridiculed by WPFW-FM talk show host Deborah Simmons as threatening to turn the city’s officers into, “sitting ducks.”

Grosso, along with the other 12 members of the city council, voted unanimously last week to adopt one of the strictest concealed carry laws in the nation Tuesday, calling for 16 hours of training, “good reason” be proven for consideration, and a host of other restrictions.

The measure, outlined in a 21-page bill, comes in an effort to comply with a federal court order that struck down the District of Columbia’s ban on civilian use of handguns outside of the home.

Metro Police Chief Cathy Lanier is due to speak at the second round of hearings on Oct. 27.