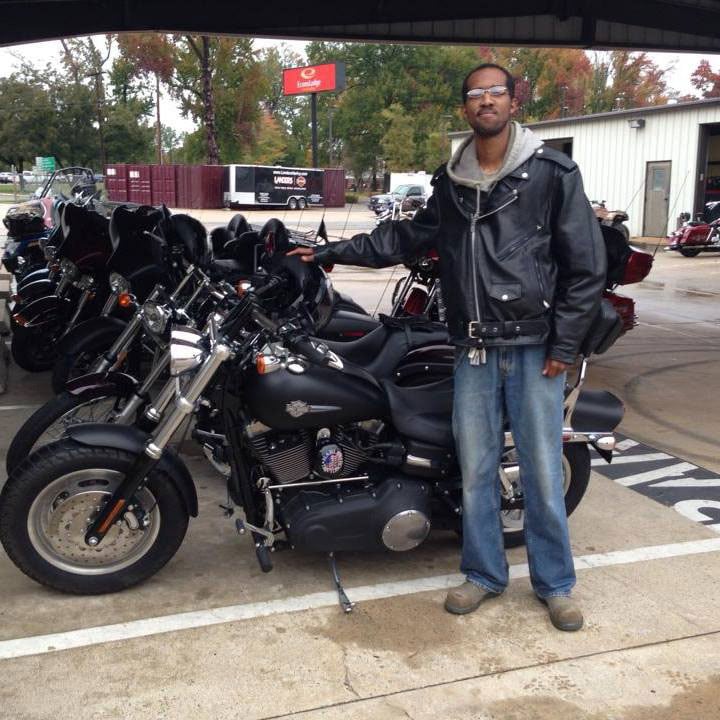 Derrick Brown, who is an Air Force veteran, stands next to his hog. (Photo: Facebook)

For more than a year, controversy has surrounded Arkansas’s Act 746, which some interpret as removing restrictions for open and concealed carry in The Natural State. Legislators and law enforcement officials are divided on how to interpret the law, but a current court case may very well set the precedent and clarify what exactly the law allows.

Derrick Brown, 28, challenged the law in a Lonoke County court Wednesday by entering a not guilty plea to his charge of the illegal carrying of a firearm, a Class A misdemeanor.

In August, a police officer stopped Brown inside of a Walmart in Cabot because of his holstered handgun hanging from his belt and issued him a citation. And herein lies the controversy: both men thought they were correctly interpreting the law.

Brown thinks the law allows him to legally carry a handgun — concealed or open — as his intent was not to harm others.

Part of what lawmakers aimed to do with Act 746 was to clearly define “intent” as it relates to carrying a weapon. Before the changes, the law considered it an offense to carry a handgun with the purpose of using it against another person. The wording of the law was confusing, as some read it to include those carrying a handgun for self-defense, but Act 746 added an amendment to specify that an offense was committed only when it is carried “with the purpose to attempt to unlawfully employ the weapon against another person.”

Since it is not unlawful to defend oneself with a handgun in the state of Arkansas, the Act clearly excluded such individuals from breaking the law. However, the Act does not specifically allow open carry nor does it prohibit it, which leads to the confusion.

Arkansas Carry, a gun rights group that supports open carry, thinks the law makes Arkansas a “Constitutional Carry” state, meaning there are no restrictions on carrying a handgun for self-defense.

“This technical change decriminalizes the carry of handguns for self-defense purposes, and puts the burden upon a prosecutor to prove criminal intent of a person carrying a handgun,” the group said about the amended law. “Also, there are no specifications whether a legally carried handgun should be carried openly or concealed; thus it is considered Constitutional Carry by Arkansas Carry and the gun owners of the state.”

The group has been pressing legislators and law enforcement alike for their own interpretation and even conducted “open carry walks” in cities across the state to help raise awareness to Act 746.

On the other hand, the state governor, Mike Beebe, disagrees. His spokesman Matt DeCample said he thinks the interpretation is just that of Arkansas Carry. DeCample added that Beebe, who has historically opposed open carry, did not sign the law with the intention of allowing open carry in the state.

In the court system, Jeff Wankum, the attorney representing Brown, told Guns.com that he agrees Act 746 places the burden of proving unlawful intent on the prosecutor.

He explained the amended law creates a complex situation where police could charge an individual for unlawful carry if that person carried a gun so it was both accessible and available for use, and he or she had the intent to use it unlawfully upon another person. “Act 746 fundamentally de-criminalized the carrying of a weapon in almost all instances,” he said.

And Brown created no apparent disturbance or a cause for alarm. According to documents obtained by Guns.com, no one at the store called 911, but rather a friend of the responding officer allegedly called the officer, who was in the parking lot at the time, on his personal cell phone to inform him about a man open carrying a pistol inside the store.

Additionally, details in the police report do not indicate that Brown acted in a threatening manner and the responding officer even says in the report that “the subject was very cooperative.”

Brown said he is hopeful that the justice system will work fairly, and his attorney thinks that his argument will work in similar cases.

“Other courts will most likely look to what the judge or jury does in this case when it comes up again in another town,” Wankum said. “Unfortunately, I believe this will come up in another town before it is all said and done, and I look forward to making the same arguments then as I am now.”

Wankum made a motion Wednesday to move the case to a circuit court, which was accepted. Although no court date is presently set, Wankum thinks it will likely be within the next two months.