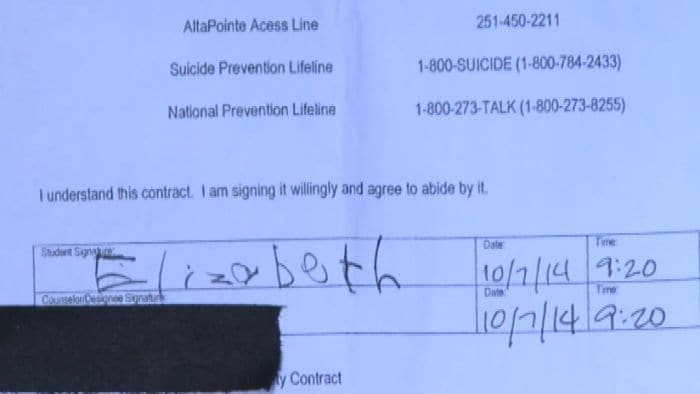 A 5-year-old student was forced to sign a safety contract Thursday after she pointed a crayon at another student in class and said, “pew-pew.” (Photo: Local 15)

The “safety contract” that school officials made an elementary school student in Alabama sign after an incident with a crayon in class has the child’s mother seeing red.

School officials at E.R. Dickson Elementary School in Mobile took action Thursday after a student, identified only as five-year-old Elizabeth, allegedly drew a picture that some contend is a gun and then later pointed a crayon at another student and said, “pew-pew.”

While waiting for Rebecca, Elizabeth’s mother, to come to the school, the child was questioned about suicidal thoughts without her parent’s permission and made to sign a safety contract in which she promised not to kill herself or others. Rebecca feels this is a case of the school district going too far.

“My child interrupted us and said, ‘What is suicide mommy? Daddy what is suicide?” the mother told Local 15. “As a parent that’s not right. I’m the one should be able to talk to my child and not have someone else mention words like this in front of her at all.”

While the school district contends that the contract was a standardized form used as a “one size fits all” solution in situations such as these, the distraught parent questions the protocol of its use. The contract, which is not legally binding, is unnecessary said Rebecca, with the child unaware of what she truly signed.

“Most of these words on here, she’s never heard in her life,” Rebecca said.

Still, school officials on Friday tried to explain their position on the safety contract while admitting that the situation could have been handled better.

“I think if we had stepped back and looked at the situation and that others could have been involved — if the principal had known about it — we could have probably had some additional guidance,” Mobile County school system Superintendent Martha Peek told AL.com.

The Alabama incident is not the first time that parents and school administrators have not agreed over apparent policy overreach where guns are concerned. In just the past two years, schools have suspended students over Lego guns, shirts with guns printed on them, Nerf guns, using their finger as a gun, and drawing clouds in vague gun-like shapes.

A preschool in Nebraska even asked that a 3-year-old deaf child named Hunter, whose name is spelled in sign language with the sign that resembles a gun, seek alternative means to communicate his name.

This in turn has led lawmakers in several states to propose legislation that tries to set some sort of limits to zero-tolerance policies and playtime. One such bill introduced in Florida this year was signed into law in June.

“Anyone that believed that a 5-year-old child should be suspended from school for pointing a finger and going ‘bang bang’ has some serious problems, yet that’s been going on around the country,” Marion Hammer, past president of the National Rifle Association, explained to Guns.com on the Florida legislation at the time. “Zero tolerance doesn’t mean traumatizing young children for being children when they play.”

Mobile County School officials, who recommended Thursday that young Elizabeth see a psychiatrist, now advise that the incident would be evaluated.