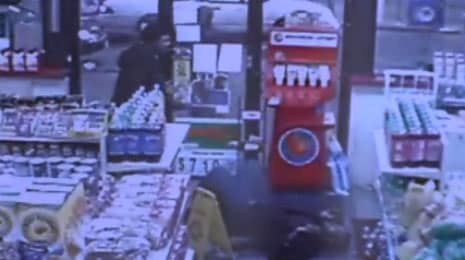 A suspected robber died after being shot Thursday night during what police believe was a failed robbery attempt in Milwaukee.

The suspect, who was later identified as 22-year-old Itavian D. Belcher, walked into a gas station about 10 p.m. with a gunshot wound asking for help.

“I was taking a customer and then one guy came and he said that there was shooting, some shooting going on outside,” the store clerk, Muhammad Mateen, told CBS 58. “So then I go and look and the guy was coming from the parking lot and he had blood in his mouth and everything and then I opened [the] door for him and he come inside and just lay down.”

Mateen called 911 and some of the store’s customers attempted to help Belcher. First responders also administered aid to Belcher, but he was pronounced dead at the scene.

Investigators believe that Belcher was shot in the parking lot of a nearby apartment complex before making his way to the gas station for help. An unidentified 30-year-old woman was also shot, and although authorities have not released many details at this time, it appears that the gunfire erupted during an attempted robbery.

The woman was transported to a local hospital where she is expected to survive.

Authorities believe Belcher shot the woman, but did not say if the robbery victim or someone else shot Belcher. Some media outlets are reporting that Belcher shot the woman and was then shot by a different individual during a second robbery attempt a short time later. However, this has not been confirmed.

Officers also did not indicate whether a weapon was found on Belcher.

According to the Journal Sentinel, a search through the state’s court records did not produce any results for Belcher.

The incident continues to be under investigation. No one is in custody and no charges have been filed at this time.