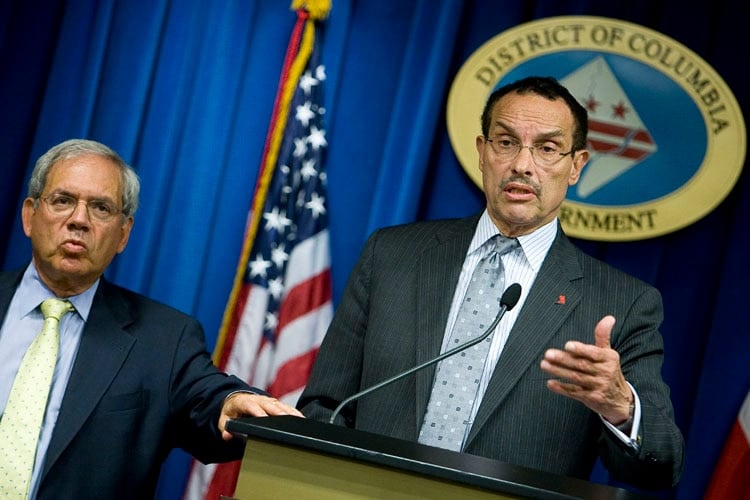 Washington D.C. Attorney General Irvin Nathan (left) cautions that while the District may have a new concealed carry law signed by Mayor Vincent Gray (right), those found carrying a gun without a permit would be in hot water. (Photo: Legaltimes.com)

Mayor Vincent C. Gray signed the District of Columbia’s strict new emergency concealed carry law Friday while the city promises to confiscate guns of those found to be carrying without a permit.

The temporary act, set to run just 90 days while the city works on a more permanent set of legislation, is in an effort to appease a federal court order that mandated the nation’s capital strike down its ban on carrying guns outside the home. That case, Palmer v D.C., was decided in July by U.S. District Court Judge Frederick J. Scullin, who allowed the city until Oct. 22 before his judgment went into effect. The legislative response to Scullin’s order is a harsh “may-issue” set of regulations that are termed by many to be among the most restrictive concealed carry laws in the nation. Nevertheless, District Attorney General Irvin Nathan and Police Chief Cathy Lanier cautions those who would carry that should they do so without a license, grave consequences would follow.

“The law cures the alleged constitutional flaws in the District’s licensing laws found by a U.S. District Court in the Palmer case,” reads a joint statement by the Chief and Attorney General posted on the Washington Metropolitan Police Department’s website Friday.

“In the meantime, except as authorized for law enforcement, carrying a gun in public remains a criminal offense, and anyone found doing so will be subject to arrest. The District’s Office of the Attorney General is prepared to prosecute all cases within its jurisdiction. All firearms will be seized as contraband. Firearms with a valid registration in the District of Columbia will be held as contraband unless and until the person goes through the process of applying for a valid license to carry,” the statement carefully spells out.

The law was signed the same day that at least two separate homicides occurred inside the District. According to the Washington Times, one of these occurred when a victim was shot by a masked man in a barbershop in the Anacostia section of the city while another victim was killed in a shooting that took place at an area apartment complex.

Washington D.C.’s new gun licensing scheme is set to go before Judge Scullin later this month for approval, which plaintiffs in the case are requesting he deny due to its harsh and restrictive language.