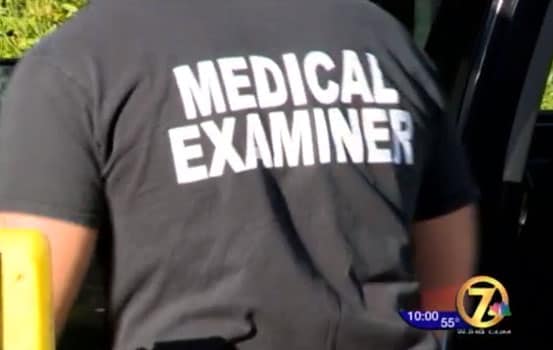 The shooting marked the second domestic-related fatality in Bay County in a little over a week. (Photo: WJHG)

A domestic dispute in Allanton, Florida, turned deadly when a young man fatally shot his father in an attempt to save his mother from being killed.

James Ivey and his wife had began arguing the afternoon of Oct. 3 and when things escalated, Mrs. Ivey left the home and fled to a nearby wooded area to hide, local media reported. James then got into his truck and went to find his wife.

Some time later, the couple’s 21-year-old son, Kyle, came home to find the house empty and called his mother on her cell phone. Once she received her son’s phone call, she returned to the home, but James soon returned as well and the fighting resumed.

As the fighting once again escalated, Kyle stepped in between his parents in an attempt to diffuse the situation. According to his mother, Kyle tried several times to get his father to back down, but this only angered James more, who then retrieved a firearm as he threatened to kill his wife. But Kyle also grabbed his gun and after he was shot by his father in the abdomen, Kyle returned fire, striking James.

During the exchange, Mrs. Ivey ran to a neighbor’s home to call 911.

When officers arrived just before 3 p.m., they found James and Kyle in the home, both had been shot. James was pronounced dead at the scene and Kyle was taken to a local hospital where he was scheduled to undergo hip surgery but is expected to survive.

“We have been able to determine from the medical examiners office through the bullet wound and again from the evidence that we believe that Kyle Ivey was acting in self defense protecting himself and his mother. And so at this point, no charges will be filed,” Bay County Sheriff Frank McKeithen told WJHG this past Friday following the close of the investigation.

October is National Domestic Violence Awareness Month and on the morning of the shooting, the Bay County Sheriff’s Office had held a workshop on domestic violence, which authorities say is a big problem in the area.

“It’s a problem in our community, and a problem across the nation, obviously,” said Ruth Corley of the Bay County Sheriff’s Office. “I find it ironic that the day we were trying to reach out and help victims, and families, and loved ones of victims to inform them of what services are available should they want to leave that situation in which they find themselves victimized by domestic violence this would have happened. It’s very sad. It’s a very sad situation.”