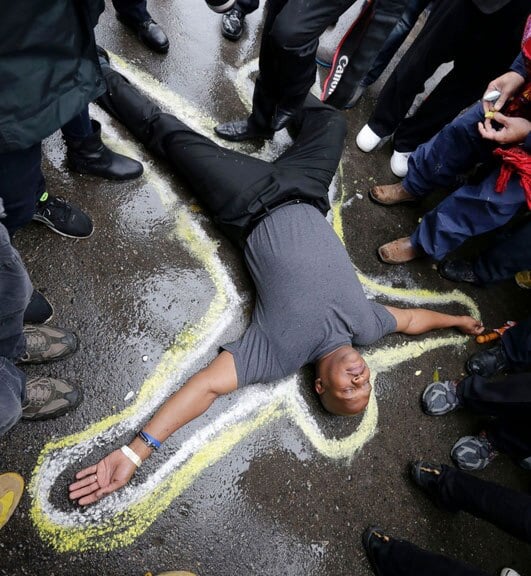 Protesters made a chalk outline of a body outside the Ferguson Police Department as a memorial to Michael Brown. (Photo: ABC)

Activists gathered over the weekend in St. Louis and Ferguson, Missouri, to continue to protest what some believe is racial profiling and police brutality.

The protests, which altogether consisted of more than 1,000 participants, were part of a movement known as “Ferguson October” and stretched past the weekend to be coupled with a campaign called “Moral Mondays.” Seventeen people were arrested, charged with unlawful assembly, and later released, ABC reported.

Clergy marched from a local church to the Ferguson Police Department, where they were met with a line of officers. Protesters demanded to get inside to talk with officers and even said they were willing to get arrested to do so.

Protesters linked arms to form a human chain in front of a line of officers, who demanded that the crowd disperse. Some heeded the warning and others did not.

“The people who were left there were people who made a conscious decision they wanted to be arrested,” said St. Louis Police Chief Sam Dotson.

Later that night and early into Monday morning, protesters shut down an intersection where they skipped rope, played hopscotch and tossed around a football in the streets, playing on one of the chants of the protesters, “They think it’s a game. They think it’s a joke.”

The playful protesters, along with others, then marched to St. Louis University where they staged a sit-in.

Tensions in the area originally were taut following the shooting death of 18-year-old Michael Brown by Ferguson police officer Darrin Wilson in August. According to Wilson, who was physically assaulted by Brown, he shot Brown as the two struggled to gain control of the officer’s gun. However, some witnesses said that Brown had surrendered and had his hands in the air when Wilson shot him. 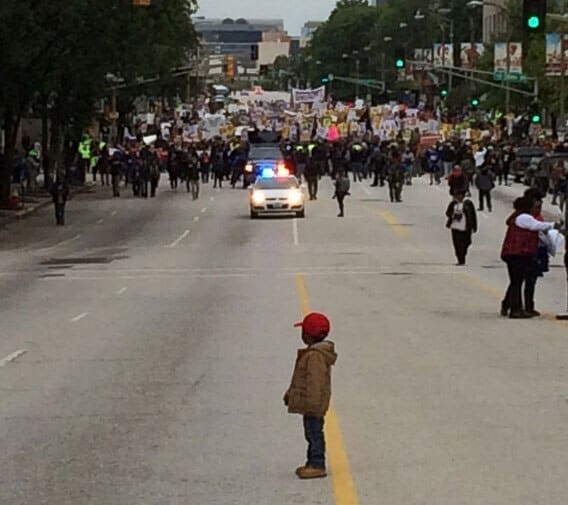 Some question whether the shooting was racially motivated – Brown was black and Wilson was white.

The shooting death of Brown set off a firestorm of protests – some peaceful, while others ended in rioting, looting and destruction of property.

While the city had finally seemed to retreat to a somewhat peaceful state, tensions were reinstated following the shooting death of another black teen by a white, off-duty police officer last week. Vonderrit D. Myers was fatally shot by the officer, who was working security in a local neighborhood Wednesday night.

According to authorities, Myers fired several shots from a stolen handgun at the unidentified officer, before the officer returned fire, shooting a total of 17 times, striking Myers, who later died.

But Myers’ family members do not believe the incident played out as authorities said. They also claim Myers was unarmed and only carrying a sandwich when he was shot, although authorities said the gun carried by Myers was recovered at the scene.

The incident continues to be under investigation.