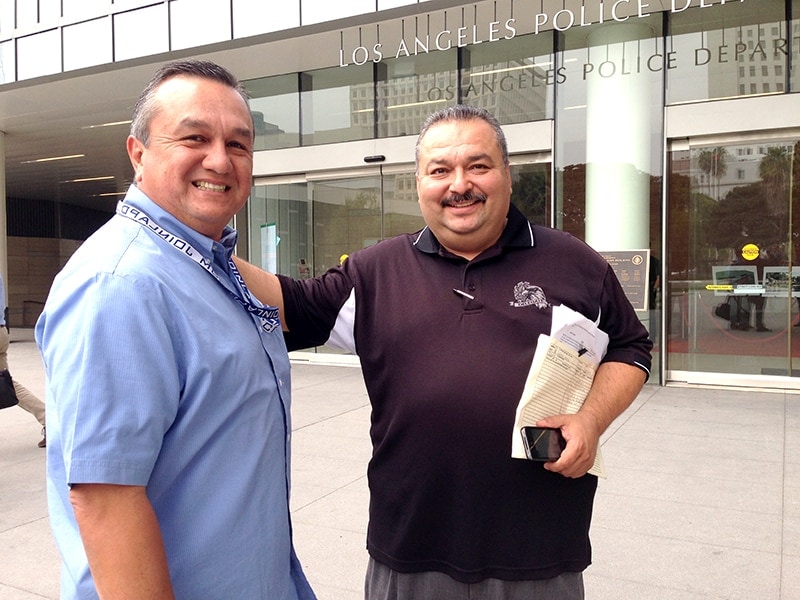 LAPD detectives David Nunez and Chris Graciano pose for a picture outside of LAPD headquarters after the police board of commissioners “ghost cars” meeting on Oct. 14, 2014. (Photo: Jared Morgan/Guns.com)

An investigation of the Los Angeles Police Department’s use of so-called “ghost cars” to inflate patrol numbers revealed that some officers could have been logging into work from home, Inspector General Alex Bustamonte told the Board of Police Commissioners Tuesday morning.

Other officers reportedly logged into the system and then returned to the station for the remainder of their shift instead of patrolling the streets as thought.

Upon learning of the false deployments, which investigators say happened at five of the department’s 21 patrol divisions, the department immediately responded and stopped the practice, according to officials.

The inaccuracies occurred during multiple shifts at different times of day and involved officers of various ranks, according to a report released by the inspector general on Friday.

But the problem could be wider spread than the initial inquiry revealed. Bustamonte’s investigation will continue and another report will be submitted to the board in 90 days.

The inspector general’s office first learned about the inflated numbers in March when an unspecified number of officers came forward, claiming they couldn’t tell their command for fear of retaliation.

Bustamonte said he would continue to protect the identity of the officers, to which police Chief Charlie Beck said he didn’t need to know their identities and that he was committed to solving the issue that some are calling systematic and a culture of data manipulation.

Beck could only speculate that if the problem were at the command level, then the incentive to inflate the numbers would be to meet the goals placed upon them by the Office of Operations, which puts a patrol plan and goals in place, he said.

“Occasionally, a captain may feel that his decisions are more important than the Office of Operation’s decisions and that might lead to this,” Beck said.

Commissioner Robert Saltzman said it was important that officials not “incentivize shortcuts” by putting pressure on those who report the data.

An investigation conducted by the Office of Operations found no evidence that officers were logging into the system with a patrol car code and either working at their station or from home, Beck said.

The discrepancy in reports from the operations office and the investigator general comes down to how you look at the data, Beck said.

Station supervisors are required to input the number of vehicles deployed into a program called Patrol Plan, a database for tracking LAPD’s patrol car deployment levels. The system tracks statistics for each division and bureau, which are then emailed to senior officers twice a day. Because there are dozens of ways to deploy officers — responding to 911 calls is just one of those — leeway is given to division captains so they can decide how to deploy their staff.

It’s unclear whether the whistle-blowers first went to their division captains to report the ghost cars, but according to Detective David Nunez, a 31-year veteran of the force, rank-and-file officers who come forward to their captains risk retaliation and harassment.

“If the chief really feels that he has the best interest of our officers in mind, well why not meet us in a conference room to discuss the interests of concern and lets change this culture,” Nunez told Guns.com.

Nunez feels Beck needs to bolster the patrol plan because there aren’t enough officers patrolling the streets, which puts those officers who are out there in greater danger.

The detective called LAPD’s discipline system “archaic” and blamed it for officers going outside their chain of command to report problems.

“We need support from the community, from our chief and the management,” said Nunez, who is running to become one of nine directors on the Los Angeles Police Protective League, the officers’ union. “If we get those things and then a contract for the rank and file, I think everyone will benefit.”

Nunez sees the issue bringing an increase in department staffing, but Beck disagrees.

“Do I think the city council will give us more money for more officers? No,” Beck told Guns.com.

Los Angeles Mayor Eric Garcetti could not be reached for comment by story publication.