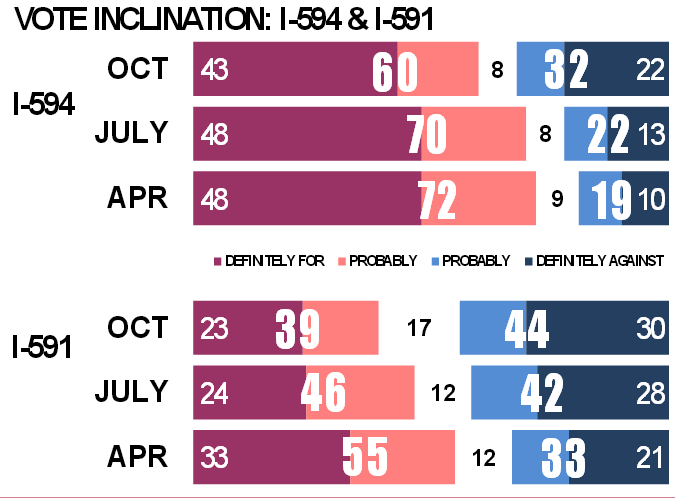 The latest Elway poll of 500 registered voters in Washington state, released Monday, showed a 10 point drop in surveyed support from 70 percent in July to just 60 percent in the current survey for I-594, a gun control measure that would expand background checks to most private sales.

A competing ballot initiative, I-591, which would aim to largely keep the status quo, likewise saw a smaller seven point decline in support from 46 percent in July to 39 percent of those surveyed. Pollsters also found that an estimated 22 percent of likely voters surveyed indicated they would support both measures.

Poll organizers warned that historically, 24 of 29 measures that polled with over 60 percent support in this close to an election have won.

“Under this theory, I‐591 looks like a goner and the question is whether I‐594 will hold on to enough of its 10‐point cushion over the next three weeks to prevail,” said the pollster, Stuart Elway. He also cautioned that typically, the mid-term election set for Nov. 4 is seen as a low‐turnout election and the electorate will be more conservative, which may prove important.

The state Republican Party has publicly called on GOP members to cast “no” votes on I-594 while the Democrats endorse the initiative.

The debate for these two initiatives has seen the gun control measure funded by a growing war chest of more than $8 million provided by a handful of wealthy donors such as Microsoft alumni Bill Gates and Paul Allen. Last week, former New York Mayor Michael Bloomberg’s Everytown group pledged another million to the campaign. The national gun control group has also dedicated efforts to fund studies to see if there’s a loophole in Washington that makes it easier for criminals and other dangerous people to obtain firearms.

Supporters of I-594 feel that, even though they have been consistently shedding points in each poll taken by Elway this year, they are still close enough to win, while the competing pro-gun initiative is having problems.

“They are obviously struggling because people want to strengthen background checks and the more they hear about 591 the more they realize 591 is a step backwards,” Washington Alliance for Gun Responsibility campaign manager Zach Silk told Seattle Weekly. “While they are still within striking distance, they are in a tough spot: peddling an unpopular measure with ballots dropping this week.”

Gun rights advocates in the Evergreen State are taking the latest poll in stride.

“The poll is not of likely voters but of just registered voters,” Alan Gottlieb, chairman of the Citizens Committee for the Right to Keep and Bear Arms told Guns.com Monday. “It all depends on turnout. This close in any poll not done with likely voters does not tell us anything.”

Meanwhile, the National Rifle Association, who has been largely quiet in the ballot debate in past months, has begun airing a series of ads in the state last week against the expanded background check measure as part of their “No on 594” campaign.