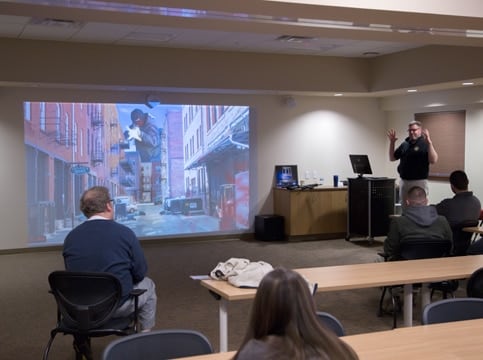 The Centennial Gun Club in Colorado plans to instruct up to 450 school and university employees in proper concealed carry techniques in a single day. (Photo: CGC)

Featuring 45 instructors and the seal of approval of the county sheriff and district attorney, a Colorado gun club aims to certify as many as 450 educators and administrators to become concealed carry permit holders.

Centennial Gun Club, located about 45 miles outside of Denver, plans to hold the event Nov. 8 in a private hanger at a local airport that was donated for the purpose. The class is open to all school staff from teachers to administrators and food service workers. Participants will complete six hours of classroom training at the hangar and then finish the shooting portion of the class at the gun club itself where range time and a rental firearm will be provided. The only costs for the training, which normally costs $175, are $20 for ammunition and targets and an optional $5.36 for a boxed Chick-Fil-A lunch.

The massive class was organized in response to the “epidemic of school shootings and other illegal gun violence perpetrated in gun-free zones” and from the huge interest expressed in past free classes offered by Centennial.

“We have seen cowardly and heinous acts perpetrated on our children, teachers, and others in gun-free zones. We cannot continue to leave our children – our future – defenseless in the face of such attacks,” said Paul Stanley, Manager at Centennial Gun Club in a release Monday. “Training our educators on how to use firearms safely will help them gain confidence and competence in the handling and use of firearms and could prevent the next Columbine, the next Sandy Hook.”

The class — for which the range said some 360 have already signed up — will be conducted by NRA-certified firearms instructors who have donated their time while the legal portion of the program will be delivered by Arapahoe County District Attorney George Brauchler, and Sheriff David Walcher.

“It’s great that we can provide our insight as to the concealed handgun process at the sheriff’s office and offer practicable examples of use of force scenarios to our citizens,” said Walcher.

The gun club cautions those who complete the course and receive a training certificate still need to comply with all of the sheriff’s requirements to obtain a permit. Further, they warn educators about carrying on school grounds without consulting what their local district polices are. Only a few rural districts have allowed permit holders, classified as school safety officers, to carry on campus. However, that could be changing in the future.

A recent poll conducted in the state found that a majority of Coloradans were in favor of arming trained educators.

A bill that would have expanded concealed carry rights to teachers on campus was defeated earlier this year by the Democrat-controlled state legislature in a party-line vote.