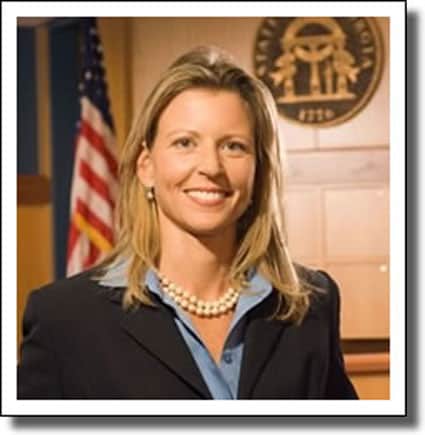 Although Judge Kelly Lee Ellerbe stated she probably won’t rule in the father’s favor, she still requested time to study the issue before making her final decision. (Photo: Fulton Court)

A Fulton County, Georgia, judge is reviewing a lawsuit this week in which a father is seeking permission to carry a gun to his children’s school events, but the judge said Tuesday it’s unlikely he’ll get his wish.

Judge Kelly Lee Ellerbe has delayed the ruling on James Johnson’s case until she has studied the issue further, Ellerbe told The Atlanta Journal-Constitution.

“My inclination is to deny the injunction,” Ellerbe said. “It’s not my final ruling on this case.”

Johnson filed a lawsuit against the Fulton County school system for the right to carry his Smith & Wesson 9mm handgun to functions at the New Prospect Elementary School in Alpharetta, about 25 miles north of Atlanta.

Johnson’s 6-year-old daughter and 7-year-old son attend the school, and currently he believes he is only legally allowed to have his gun locked in his car on school property or with him when he picks them up from school or drops them off.

Phillip Evans, a father in the metro area, has filed a suit similar to Johnson’s. And another father in Douglas County sued his daughter’s school for the right to carry his handgun, but that case was dismissed when the father finally just pulled his daughter out of the school and enrolled her in a private school.

“It’s clearly the overwhelming will of the people,” said Johnson’s lawyer, John Monroe. “It can’t just be thrown away.”

Both Evans and Johnson argue that two gun bills signed this year – HB 862 and HB 60 – are in direct conflict with each other, and they want to be clear on what is and is not allowed, as they do not wish to face misdemeanor charges for carrying a gun at school events.

HB 862, which was signed into law April 21, allowed guns to be carried on school property. HB 60 was signed two days later. But while HB 60, also known as the “guns everywhere act,” broadened the areas where guns could legally be carried, including bars, schools, churches and certain government buildings, it still restricted guns to the parking lots of schools.

However, HB 60 also repealed existing laws which were in conflict with the bill, including HB 862.

The conflicting laws have left the fathers with confusion concerning their gun rights in the state.

Ellerbe said she will likely have a decision by the end of the week.