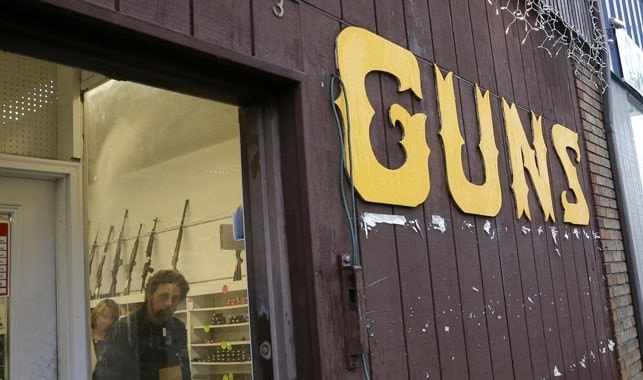 The League of Women Voters in Florida is checking that gun shops have signage posted as required by state law. (Photo: AP)

The League of Women Voters has visited some 30 firearms dealers in the Sunshine State, checking to make sure that the businesses have signage that is required by law.

The group, which is avowedly non-partisan though they have long held an anti-gun platform, is on the lookout for warning signs referencing the transfer or sale of firearms to a minor. Under state law adopted in 2011, any retail or commercial sale or transfer of a firearm in Florida has to include a written warning stating that it is unlawful for any store or adult to leave a firearm within easy access to a minor. League volunteers who are checking the dealers say only half the stores have the signage, contending that the law isn’t being followed.

“It’s a useless statute,” Patti Brigham, chair of the league’s gun-safety committee told the Orlando Sentinel. “Nobody is monitoring gun stores to make sure they’re displaying it.”

Gun rights groups in the state say that the move by the League, which is only being done so far in Florida, is about politics rather than safety.

“Show me one time, just one time that they have ever done anything to support protection of Second Amendment rights, self-defense rights of the rights of law abiding gun owners,” Marion Hammer, former NRA president and director of the Unified Sportsmen of Florida told Lee Williams of the Herald Tribune. “Show me one time that the Florida League of Women Voters has ever spent any of their money on programs to protect children from gun accidents. On the other hand, NRA has spent tens of millions of dollars on gun safety for children. NRA’s Eddie Eagle program, that I personally helped create in 1988, has been taught gun safety over 27 million children.”

Firearms industry experts are perplexed at the actions of the civic group, as the Bureau of Alcohol, Tobacco, Firearms and Explosives, which is tasked with enforcing compliance with federal gun laws, conducted over 130,000 inspections last year. Likewise, state and local authorities and regulatory bodies would enforce local laws. This points to a more political issue afoot.

“It is not immediately clear to us what signage is posted at a licensed firearms retailer has to do with encouraging voters to participate in elections,” Larry Keane, general counsel for the National Shooting Sports Foundation told Guns.com Thursday.

League representatives told Williams that they are not anti-Second Amendment and are not the “gun shop police,” but they do support responsible gun ownership.

The move in Florida echoes gun control support shown by the group elsewhere in the country. This includes backing I-594, an enhanced background check ballot measure in Washington State  as well as throwing its weight behind increased federal gun legislation.