Gun owner at Britain’s most remote pub has guns confiscated 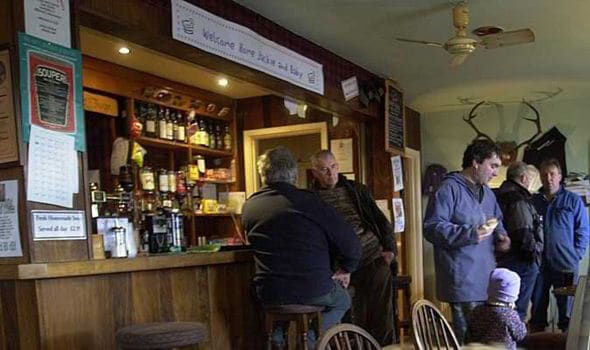 The Old Forge in Knoydart, Scotland, is the most remote in the country, forcing authorities to have to rent a boat to come and seize its owner’s cherished hunting tools. (Photo: Express.uk)

An avid hunter who owns a pub listed as the most remote by the Guinness Book of Records, has been ordered to forfeit an estimated $25,000 worth of guns that were confiscated by police.

Jean-Pierre Robinet, owner of the Old Forge pub in Knoydart, a town of just 111 in Scotland fought back tears this week as the Fort William Sheriff Court declared that his .300 Blaser rifle and a shotgun that he had brought with him when he emigrated from Belgium were illegal and forfeit. Robinet had legally owned the guns in Belgium and had traveled with them back and forth from the Continent to the UK for 16 years. There every autumn in the thick forests around Knoydart, which can only be reached by boat or 18-mile overland hike, he would hunt for two weeks. These hunting trips led the Belgian restaurateur to buy the Old Forge nearly two years ago.

However, since he is now a full-time UK resident, the guns are illegally owned and will now be disposed of.

“It is a hunting tradition, and in my case a family tradition as well, that you hand your hunting rifle down to your son, and my father is dying,” said Robinet in court this week following the verdict.

Local police, acting on information of the illegal guns, raided his home while he was away in a search for the contraband. Ironically, officials admit that Robinet had complied with European Union and UK laws in earlier years when he visited on his hunting trips, with the guns just becoming illegal once he took possession of the pub.

The pub, cited by the Guinness Book of World Records as being the most remote in Great Britain, has consistently been voted as among the best in the world.

The UK has some of the strictest gun control laws in the world, with a near blanket prohibition on all handguns since 1997. However, many in the country are eager to see that change.

Criminals, on the other hand, still seem to be able to acquire guns by a variety of means. On a number of occasions in recent years, criminals have used antique guns, converted blank-firing pistols, homemade weapons and modern guns smuggled into the country to commit crimes.

“Because I accept that there is no willfulness in Mr. Robinet’s breach of the law, it would be inappropriate to impose any penalty other than confiscation,” said Sheriff Richard Davidson.