'I don't want to shoot you, but I will,' armed citizen says to knife-wielding man outside Philly grocery store (VIDEO) 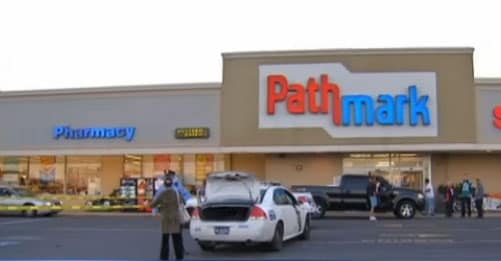 A man was stabbed in the face and neck at a Philadelphia Pathmark last week, but William Lawler said he carried his handgun long before the incident occurred. (Photo: ABC)

A man is recovering from a gunshot wound after he allegedly threatened another man with a knife in the parking lot of a Philadelphia grocery store Sunday evening.

It was about 5:30 p.m. when William Lawler and his girlfriend were confronted by a man outside of the Pathmark store. Lawler said the man “looked odd from the beginning.”

Apparently the man, who was later identified as Dondi DeCosta, became outraged when Lawler looked at him “for no reason,” ABC reported. DeCosta then pulled out a 13-inch knife and allegedly threatened Lawler and his girlfriend while mumbling and cursing at them.

Lawler, who is an Army veteran, a firearms instructor, and substitute teacher, unholstered his Glock 9 mm and held it at his side to persuade the man to leave him and his girlfriend alone.

“Nine times out of 10, all the gun owner has to do is show the firearm, and the threat goes away,” Lawler told Philly.com, but it was a ploy that didn’t work for DeCosta, who only grew more angry.

DeCosta then told Lawler that he would cut him and came at him. But when he got about five feet away, Lawler raised his handgun and fired a shot at DeCosta, striking him once in the groin.

Lawler said he felt he was left with few choices when DeCosta approached.

Even after DeCosta was shot, he continued acting in an aggressive manner and threw the knife at Lawler, he said.

When police arrived, DeCosta, who has 21 prior arrests, including assault and theft, was taken into custody and transported to a local hospital where he remained in critical condition. Once released, he will face charges for aggravated assault.

“My intent was to stop him, not kill him. I hope he’s OK, and hopefully he will be prosecuted,” said Lawler, who has a concealed carry permit and has carried a gun since he was in the military years ago.

“I firmly believe that in order to maintain a free society, people need to take personal safety into their own hands,” he said. “You should walk around ready and able to protect yourself and others in your community.”

The incident was captured on the store’s video surveillance, which authorities said clearly showed Lawler tried to avoid the confrontation. The incident remains under investigation and Lawler is not facing any charges. Other than DeCosta, no one else was injured during the incident.