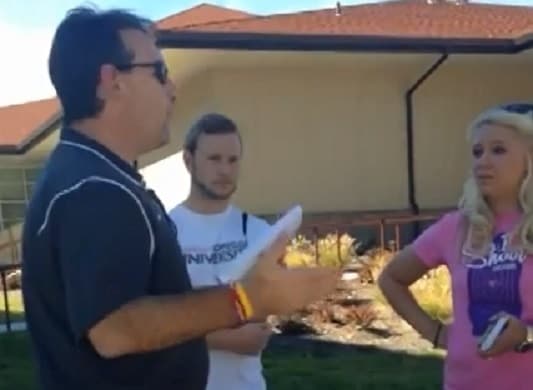 School officials attempted to stop Southern Oregon University students from passing out copies of the Constitution on campus last week as they were not in a “free speech zone.” (Photo: Campus Reform)

A group of students at Southern Oregon University were confronted by school officials and threatened with police action for passing out literature and collecting signatures on campus in off-limit areas.

The four students, members of Students for Concealed Carry, a gun rights group that advocates a number of Second Amendment issues in colleges and universities nationwide, gathered in an attempt to draw attention to the university’s practice of restricting assemblies to a designated “free speech zone” only. While collecting signatures, the group offered free copies of the U.S. Constitution to passersby.

The activism outside the free speech zone led to a confrontation with school officials who tried to direct the group to relocate to the approved zone, then threatened police interference and possible disciplinary action once the students did not leave.

“We encountered wild accusations that because the event was affiliated with SCC, there was legitimate fear for the imminent danger of students on campus,” SCC member Stephanie Keaveney told Campus Reform after the incident. “Administrators accused us of causing an immediate panic for the safety of students in the face of gun violence, or the promotion of such.”

The students said university officials debated them for several minutes on constitutional issues and the school’s policy (an extensive portion of which was caught on video) but in the end did not call in police and the group did not move from the sidewalk in the residential area they were holding their event.

“It’s just been the practice of the university in the past to try to keep those types of activities all in one centralized location that’s away from the educational process, away from classrooms,” Ryan Brown with SOU’s Media Relations told KOBI Wednesday.

Brown explained that the students do not face disciplinary action.

In recent years, student-based concealed carry organizations have fought to extend carry rights to state-funded campuses such as SOU, which is a public state university. Such efforts have been seen in Kentucky, Texas and Georgia.

One challenge to such policies in Florida in 2013 ended with a victory for gun rights supporters when an appeals court ruled that state universities do not have the power to ban law-abiding gun owners from keeping loaded firearms in their vehicles while on campus. Another, involving Ohio State University was challenged in July by a lawsuit from Students for Concealed Carry.

In the meantime, the Oregon students, who are seeking to start a chapter of SCC at the school, vow to continue to protest.